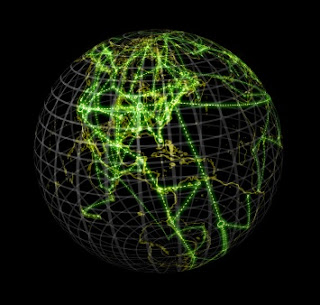 I jumped in with both feet back in the 1990's when I discovered the Internet.  I saw a world wide electronic network evolving that would bring the World together and maybe, just maybe some quieter times along with it.  My wide eyed optimism however is turning the corner towards grumpy pessimism. Twenty years later and the World is hardly a tighter knit community.  Twenty years later and all I see is more hate and discontent for the most part.

The electronic network that spread like a spiderweb around the globe is just more of the same old same old.  Instead of a melding, all we have now are bigger mobs who waste their time trying to shout down the noise coming from the other mobs.  Instead of a place to exchange ideas, I see a community where hucksters and rip offs ply their trades with impunity from thousands of miles away.  Instead of creating conditions for better social and political change, I see more paranoia and mistrust than ever before among government, religious and social leaderships and their flocks.

What I neglected to figure into this in the beginning was people.  You can give people better tools, but they are still people.  The Internet has had no effect on the base faults we all cart around in our bag of character traits.  If anything, the Internet has freed us to act out in negative ways while thinking we are protected from repercussion because we use a fake handle.

In reality, we have opened ourselves up to more scrutiny, more intrusions, and more ridicule than we had before we plugged in.  Privacy has left the building.  We held the door open and kicked it in the ass as it passed, all the while pissin and moanin about our loss of it.  Cake and eating it too comes to mind.

To be fair, my original wide eyed optimism has not been completely shot down.  I have seen and experienced first hand some of the positive wonders of the Internet.  In ways, both large and small, change has happened and is still happening.  The inventive genius types have found innovative ways to use the Internet to enrich the lives of many people throughout the world.  Some are obvious, while most float around unnoticed by all except those who benefit.

When it is all said and done, the World Wide Web and all of its spin offs are in their infancy.  We are still figuring out just what it is we have here and how far we want to take it.  By its very nature, the WWW will most likely always be evolving into something new and improved different.  And realizing that it is but a reflection of ourselves, we will or should expect that along with the Good, Evil is but a step behind.

Email ThisBlogThis!Share to TwitterShare to FacebookShare to Pinterest
Labels: Blogging, Pop Culture, Silent Conquest of Ourselves

tools don't change people. The human race has not changed since the beginning of time...we have just developed more advanced tools and weapons.
the Ol'Buzzard

The internet certainly does give mob mentality and hucksterism greater mobility, and that is a cause for pessimism. It gives me pause to think sometimes that "this could have been such a great thing". But then, enter human nature...

Despite that, it can still be great, and it can, as you point out, deliver the goods for those who need it. The net has made things easier for lots of us in lots of ways.

But your last paragraph sums it all up pretty neatly! Beware, beware... Almost like that old Walt Kelly thing about "We have met the enemy and he is us"!

I like the internet because it allows me to virtually connect with people I would not otherwise know or meet. I tend to ignore sites that express a view opposite my own; I NEVER read comments on news sites; I use it for information gathering. Other than that, the internet is crazy hodgepodge of ideas all jammed together, and screaming for attention. Most of the time I just tell it to STFU.

I've had good and bad experiences on the internut, my recent trip to Montana two meet for two days of camping and Fishing with DOC TERI and her hubby was a very good experience.

A few months ago there was a joke going around -- a person from the present telling someone from the 1950s:

"With this little hand-held device, I can instantly access every piece of information that was ever created, and I can communicate with anyone anywhere in the world. I use it to look at funny pictures of cats and get in arguments with strangers."

All was well when it was just the internet, but the introduction of html made commercializing the web too tempting for hucksters. Bill Clinton's Telecommunication Act of 1996 certainly helped to speed up the process.

Meanwhile, you're right that there's also much that is good about the web. I can spend so much time doing research I can forget what topic I intended to write a post about.