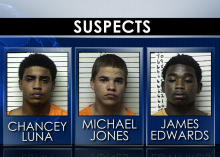 I just caught the news about the Aussie in Okie-land who was shot and killed by 3 bad examples from our diverse population.  A thrill killing.  Just for shits and giggles off someone because they were in the wrong place at the wrong time.  America is often it's own worse enemy.  Add this stupid waste of life to the rather large quiver of Americans acting badly.

I understand the cries of outrage coming in hard from Down Under.  Shouts of Boycotts, reprisals on Americans in Queensland or someplace nearby.  There is no excuse.  There is nothing I can say or do except stand up and call for these losers to be fried, or at least locked away for the rest of their useless lives.

I actually dropped my head and slowly shook it in shame for what some of my own pulled as a lark, just to see someone die.  That I do not understand it any better than the folks from Australia or anywhere else matters little now.  That I hope these assholes suffer the worst kind of treatment available behind bars is of little or no solace to the surviving group of family and friends I am sure.

Adding insult to injury, more shame waved over me when I heard a grandma of one of the young assholes say, "He's a good boy."  No, Grandma, he isn't.  Not even close, not in the same ballpark or even in the same galaxy most of us live in.  Your grandson is evil and deserves the worst the state of Oklahoma can dish out.

Email ThisBlogThis!Share to TwitterShare to FacebookShare to Pinterest
Labels: Rants, Silent Conquest of Ourselves

Ya gotta love the justice system in this country, it is only alleged that they did that. Now attorney's can stack up a lot of billable hours.

Yeah, innocent until proven guilty. I might be jumpin the gun with my extreme condemnation, but given their actions upon being arrested and apparently some serious evidence, well, I can live with what I wrote. Should they be innocent, I will be there with a retraction and an appropriate amount of guilt for making an assumption.

In the meantime, as you say, lawyers will cash in no matter which way it goes.

"...stand up and call for these losers to be fried, or at least locked away for the rest of their useless lives."

I prefer fried. Unlike most of my fellow liberals, I have no problem with capital punishment. Those three #$%&!#!!s need to be taken out of the gene pool.

Violence is now the accepted American way. I blame the second amendment: we need to rewrite that son-of-a-bitch. Our 'right to bare arms' has been carried to a lunatic extreme bringing out the crazies that seem to okay with the idea of an open season on violence. We need to establish some sensible gun laws and curtail the wild west mentality. I have owned guns all my life, but I don't look to carrying them down town and get into gun fights.
the Ol'Buzzard