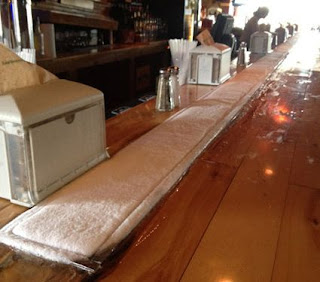 I ignored Willy's Ale Room for the longest time after it opened over 15 years ago.  Drove by it almost everyday on my way to the bike shop.  I told myself roadhouses in the sticks  were nothing but trouble with a capital T.  Evil entities lurked there just waiting to smite me down with demon rum and other sinful spirits.  Nothing ever good happened in a gin joint, honky tonk, whatever the local label might be.

My avoidance had nothing to do with fearing God or his holier than thou army.  My avoidance was because I have in the past, while visiting these dens of inequity, been lured into less than civil behavior and held accountable by the local constabulary for I swear, the stuff someone else pulled.  Besides the over the top bar bills that set me up for trouble in the first place combined with the court costs that resulted, finally made me see the light.  It was damn expensive getting into trouble as an adult.

Of course it has been well over 35 years since I  was last involved in bar chaos resulting from over indulgence.   And though I may not remember the fun that got me into trouble, I do remember the aftermaths.  I realized back then if I had any hope of making it past 40, I had better leave roadhouses alone.  My character was not strong enough to keep me sane when exposed to walls of liquor and a row of 5 pull draft handles.  Add in some good music and on occasion I had to be poured into my car after last call.  It was a public safety issue and proof even a dumass can smarten up once in awhile.

I have established my sordid past relationship with bars found in the rural outbacks of this land.  I have admitted to being weak when faced with Temptation.  All in an effort to explain  why I might have recently decided to lift my self imposed lifetime ban on honky tonks and visit Willy's Ale Room, located a short mile from my dooryard.

It's Jim's fault.  Want to make that plain right at the get go.  Had he not insinuated that Willy's provided a good chewy thin crust with their pizzas, I would have never broken that oath I made so many years ago.  He was right though.  Their crust is thin and chewy and their pizzas are definitely better than the average pizza pie in this part of the country.

So here I am now with at least 60 pizzas under my belt.  Since I have always gotten them to go, my encounters with evil liquid seductresses have been in, out, thank you ma'am,  I'll take my pizza to go if you don't mind ...... but while I am waiting, draw me a Newcastle from the tank in the dungeon.  One beer, occasionally two and I'm outta there.

As it turns out, Willy's is more of a local spot where families could go and not feel they would need to run interference from bad influences.  Good bar food, friendly and welcoming folks, and oh yeah, they have Newcastle on draft.

After 31 years of keeping those bars in business I quit a little over 10 years ago due to a whole slew of warning lights turning on. Back in the day I used to make newcastle or other dark ales at the u-brew and bottle it in 1 liter plastic Coke bottles. I could walk around drink ale and people thought I was drinking Coke until I fell over.

It's always the pizza's fault, right?

I have always considered bars to be superior to churches. You can confess your sins and everyone will just nod knowing. You can make a fool of yourself and everyone will still say hi! the next time you walk in. Your money is better spent. Bourbon unlike prayer never fails to deliver relief from what ails you. When I was a single man I found companionship in bars. Not any long term relationships but a few one nighters that were epic. Some of my best memories involve bars. Ever heard a good story that starts "well, I was sitting there in church........"

I can not even begin to tell you the stories of my drinking days..although there was this funny time when Chris Archer and I took 2 horses and rode them to another bar for a couple of beers during the rodeo parade...

It's been so long since I've been inside a bar, tavern, roadhouse, more than 30 years. And yet, I remember it well and fondly. Now it's just wine with dinner at home.

i stay away because after a couple of beers that is always someone there that pisses me off.
I'm getting a little old for the rough and rowdy ways of my younger days.
the Ol'Buzzard