Forward - Disclaimer - Whatever
This is some fiction I wrote over 3 years ago and never posted.  It was tied to a writing site, now defunct, called "Thinking Ten".  It was my last effort with Thinking Ten.  Figures I would pick "Capstone Sunday" to give it another whirl.  The Idea is to take the offered daily prompt and write for ten minutes.  Stop and then read what you have written.  Sunday's prompt is to use every prompt from the previous week.  Spit and polish it up and then submit.  I was maybe 200 words into the rough first draft when 10 minutes was up.  Decided to finish the thought no matter where or how long it took me.  Took me awhile.
So without further comment -
_______________________

"I can do it myself", Jackson hollered back at his wife of 45 years as he climbed up and into the bed of his 1976 GMC pick up.  Last night's snow storm had finally filled the back of it.  Jackson's rule was never shovel more than he  had to.  He always waited until Winter had filled the bed before he took care of it.

Squinting against the bright sun, he cussed and fumed every shovel full over the side.  His old fart back complained with every scoop.  And this last storm had turned the snow into igloo snow.  Heavy and packed, he had to add chopping it up first to the already painful scoop and toss motion.

He stopped a moment and looked down Sam Page Road.  Someone was headed up the hill.  Looked like one them damn Gallopin Gerrishes walking their dogs again.  Local custom dictated he wave to whomever passes by.  He waved and went back to shoveling not concerned to know if they waved back.  He had been civil.  That's all anyone could expect.
Lost in the chore of snow removal, Jackson did not see or hear Gerty come up behind him.
"Hey Jackson, Whatja want?"
Startled, Jackson turned too fast.  His back tweaked hard.  He knew he was in for it later.
"Jeezum Gerty, don't sneak up on me like that.  Fucked up my back.  Thanks a lot."  Jackson glared at Gerty.  " Don't want nuthin, just wavin Hey.  And he went back to Shoveling snow.

"Well", Gerty squinted back at him, "You waved.  Thought you might need some help."  She smiled.
"Go to Hell Gerty."
"What's the matter JB, in the dog house again?"
Jackson stopped shoveling.  He leaned on his shovel.  He gazed down at Gerty, that ditz from down the road. "No ma'am, no ma'm I'm not.  But I will say this....I am busy and you keepin me out here is beginning to piss me off."
They both turned when they heard someone from up towards the house call out Jackson's name
"JB, JB? ... Breakfast."  Mrs Jackson was heading down the stone walk.  "Oh, we have a visitor.  Hey Gerty, where's your mutt?"
"Left him home Edith.  Rascal don't do so well in the cold anymore."
"Well that's a shame.  Come on in have some breakfast.  Eggs, turkey sausage fresh ground yesterday, hot cereal, and my world famous Cheesy Bars."

Edith was not going to lose her focus.  Get her husband inside and out of this bitter cold.  "Well okay, but come on up anyway.  I'll wrap up some cheesy bars for you to take home."
Gerty's smiled.  "That's okay Edith.  Your cheesy bars are too rich for our tastes.  We'll never be royals. It don't run in our blood, that kind of luxe just ain't for us. We crave a different kind of buzz.  Gerty smiled again.  Guess I'll be heading home."  She turned and walked away, leaning into the blowing powder coming off the snow cover.
Jackson looked at Gerty's back as she scurried down the drive.  What an odd thing to say he thought.  And what the Hell was a luxe anyway?  He had never heard Gerty or any of those hippie dippy Gerrish's talk that way.
Jackson did not forget that conversation.  He always had been a suspicious bastard.  He started keeping an eye out for the Gerrish's, especially Gerty.  It was a couple of months later before he noticed a Gerrish doing anything, never mind something suspicious.  On his way to the dump one Sunday, he came upon Al Gerrish's old flatbead Ford half in the ditch and half out.  Al Gerrish was standing behind it looking into the back through the canvas cover.  Jackson pulled up behind him and got out.
"Need a hand Al?"
The Gerrish patriarch turned.  "Seems I gots a flat.  Got no spare nor jack neither."
"Well, how 'bout I run you home.  I'm sure you have what you need in that big ole barn of yours."
Al was silent.  He turned back around and looked one more time in the back of the flat bed.  Quickly he closed the tarp cover and re-tied it shut.  He was not quick enough.  Jackson had seen what was inside.  They looked at each other.  Neither one spoke for a moment.  Jackson broke the silence.  "Whatcha got in there, some kind of melons?  You have a green house now?  Odd, seeing melons at this time of the year."
Al stayed silent.  No expression.  He just stared at Jackson.
JB's eyes narrowed, but he did not pursue it.  He turned and headed to his truck.  Over his shoulder, "Come on, I'll run you home."  Ole Man Gerrish slowly walked to the passenger side of Jackson's truck.  As he opened the door, he turned and glanced at his flatbed, half in and half out of the road.  Jackson was pretty sure Old Man Gerrish was uncomfortable leaving his truck like that.  "Don't  worry Al, your truck won't be there long.  We'll grab a spare and get you back on the road pronto."   Al responded with a grunt and a wave of his hand indicating to get on with it.
Jackson stopped his pickup in front of the Gerrish barn and got out.  Al followed and both of them grabbed onto one of the big doors and slid it out of the way.  "You'll find a jack in the back and I suppose there will be a spare already mounted in the shed.  I'll fetch that."  Al headed towards his house and the shed he had slapped together out of old metal roofing 40 years ago.  Jackson got busy locating the jack and lug wrench.
Jackson had not been in the Gerrish barn for years.  But he had worked for the ole man in his fields when he was young.  The various tools the farm needed had always been found in the back of the barn.  Any tool that couldn't be leaned up, was thrown on the floor.  Jackson began his cussin and fumin as he sorted through the pile of handles, metal and hand tools.  "Yep, he thought, "Still the junkyard I remember."
It took JB awhile to find a jack and lug wrench.  When he got back to the GMC, he saw a mounted tire leaning up against the back of his truck, but no Ole Man Gerrish.  Figuring he would be right along, Jackson climbed into his truck to wait.  He waited and he waited.  He looked at his wrist like he had a watch on and looked back up to the Gerrish house.  Here he was doing the man a favor and all that asshole wanted to do was fuck the dog, using up Jackson's day like he owned it. 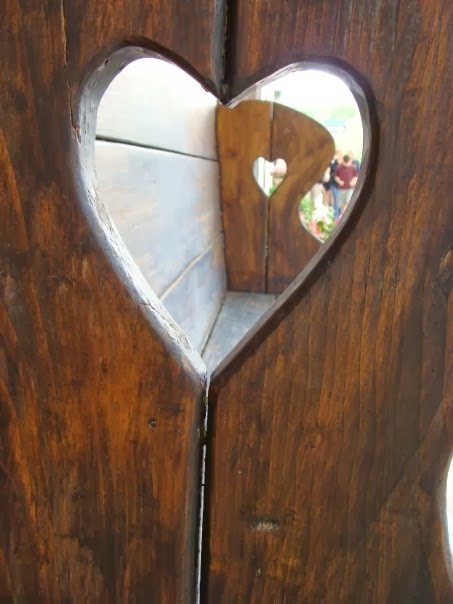 Jackson got out, slammed his truck door and stomped up to the house.  As he approached, his temper softened when he saw the two doors their hippie son had made for his parents one Christmas.  Hand caressed out of a big slab of butt maple, he had included a heart shaped window in each to let the light in.  Kid might have been a hippie, but he was a helluva carpenter.  Jackson smiled as he came to the first door with the heart shaped window.

He wondered why he was  so pissy.  Not like he had anything important other than a dump run today.  Then images of those odd melons bounced through his mind.  Those really, really odd looking ........... and he remembered the word luxe that Gerty had used.  A knot began to form in Jackson's stomach.
Gerty opened the door.  She was not smiling.  She had some very odd looking shears in her hand.  More like pincers, Jackson thought.  "Come on in.  Pap'll be out in a minute."  The way she was holding those shears, Jackson had to enter sideways.
He stopped in the mudroom, hoping he would not have to go inside.  It was mud season.  Local etiquette insisted he take off his boots before heading in the house proper.  Gerty pushed past him and headed right in the house.  She still had on muddy shoes.  Jackson could not believe it.  Gerty's mom would have smacked her into next week if she was still alive and had caught that action.  He shrugged and stomped as much mud off as he could and followed Gerty into the Gerrish kitchen.
Gerty turned and looked at Jackson.  "You know we can't let you tell anyone about those melons, dontcha?"
Jackson studied her face.  No emotion.  No color. No expression whatsoever.  "No I guess not."  He looked at the shears in her hand.  "Those for me?"
From deeper in the house a voice.  "Yeah JB, it's time to feed you to your replacement."  Ole man Gerrish came into the kitchen.  He had a syringe in his hand.  "This ain't the movies.  Takes time for the melon to mature, so you go in a piece at a time."
"You ain't Ole Man Gerrish and you ain't Gerty either.  Are you?"   He  glared at Gerty.  She smiled.  Fear of what was to come had frozen Jackson's feet to the floor better than some 16 penny nails pounded through his boots.  He could not move.  Ole Man Gerrish's replacement sauntered up to Jackson.  He grabbed a fist full of JB's hair and held fast.  Bringing up the syringe to Jackson's neck, he spoke.  They were the last words the real Jackson ever heard.

That was great, Mike, but please continue. You help me to want to write tio

Hoping you return to posting soon, even if only small posts.