Secretary of the Future 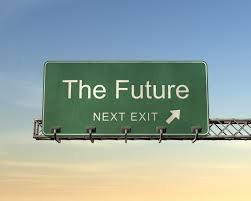 Mornings in the garage, I punch up the small radio I used to include with my tools when banging nails for money.  It is covered with paint spots, one corner is crunched after a fall from 40 feet, and the back is taped on as a result of that fall.  I have it perched precariously on the edge of the one window in the garage.  Where else would I park it?  A radio like that that laughed in Death's face all the way down, deserves to live out its life as it lived it, outside the safe environs of a deep solid shelf.  Besides, it only pulls in stations when it is that close to the window.

So this morning I punched it up, and NPR had a short , very short, interview with Kurt Vonnegut.  It figures he would ask the question, "Why don't we have a Secretary of the Future in the President's cabinet?"  He went on to point out that there was a secretary for almost everything else, but no one looking out for what is coming down the pike.

"Hmm."  I think I actually said this to myself. "Hmm, A Secretary of the Future."

Of all the wacky things I have thought of, an official somebody looking forward instead of behind never occurred to me.  Immediately I began to consider just how this new bureaucratic agency would work.  So I phoned them.  Phoned then in my mind of course.  Their existence or non existence will be determined at some future date.  This future conversation ran something like.............

"Good Morning, you have reached the Department of the Future.  Your call is important to us here in the future.  All of our agents are currently busy dealing with the future.  Please leave your name and number and your reason for calling.  An agent will be contacting you at some future date and time to address your question and concerns regarding the future.  As we here at the Department of the Future cannot actually predict the future and can only offer possible scenarios, the status of your call will be determined by which number you dial now."

"If you think we might call, but it will be after you have forgotten why you called in the first place, dial 2."

"If you think we will call right back, dial 3 and hold your breath until that happens."

"For all other possibilities, please stay on the line.  An agent will be with you shortly in your dreams after you have passed out with the receiver in hand."

That was my first go at imagining what a Department of the Future phone call might be like.

"You have reached the Department of the Future.  Your call is totally meaningless in the future, as it will already be in the Past once we listen to your message.  Only future contacts are handled here at the DOF.  Thank you for calling."

Anyway, that is what was on mind in my recent past.  Who knows what will be slinking around in my upcoming future.  Maybe I should call the Department of the Future.

Email ThisBlogThis!Share to TwitterShare to FacebookShare to Pinterest
Labels: Humor, Sanity, We Interrupt This Program

that made me laugh out loud.

the secretary of the future is on tralfamadore having his way with montana wildhack at this very moment. the german batball season just opened so he'll probably be off to see his buddy rumfoord very soon.

Kurt Vonnegut was a wonderful author! I had the lucky pleasure to be given tickets to hear a talk he gave when I was in graduate school. It was excellent!

Why don't we have a Secretary of Peace? Not to take away from your post, it was pretty funny.

Your first paragraph was perfect. Then I read your second paragraph, saw that you'd been thinking about Vonnegut, and understood why the first one had been perfect.

Im the meantime, I came up with the answering machine message for your new department:

Every time you are on hold you are connected to the department of the future.
the Ol'Buzzard

I'm with Jackie Sue on this one. I laughed.