Beauty is Only Skin Deep 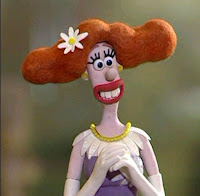 I was watching TV awhile back. Or rather I had it on. More for the noise than anything else while I attended to minor chores.  One of those tabloid shows was on.  The hostess with the perfect coiffure and the perfect teeth behind the perfect smile introduced a woman who was addicted to cosmetic surgery.  The lead in and my first and only look let me know all I wanted to hear and see.  I went back to whatever chore I was dealing with, hoping to work the horrific image out of my mind.

But I could not get the picture of her out of my mind. She had had so much skin pulled, tucked, inflated and re-arranged, she looked like a claymation figure.  The more I considered her image, the more absurd and further from reality it became.  I could not imagine what waking up next to her would be like.

I finished my chores and immediately fired up the computer.  Apparently there is a medical definition for addiction to cosmetic surgery.  It is known as "body dysmorphic disorder".  What is it with the medical folk that they insist on labeling every problem with a name that normal folk cannot understand?  Couldn't they just label it "addiction to cosmetic surgery" and be done with it?  Whatever.  I guess somebody has to keep a breath of life in a dead language.  Might as well be doctors.

With the unfortunate woman's face still fresh in my mind, I stopped in front of the bathroom mirror and considered what might be needed to give me twenty years back.

Hmm ......... No double chin yet. That's good I guess. My face is slightly larger now, but there's still almost a full head of hair on top.   My nose is still small and inconspicuous. Again, a good thing I guess.   But I'll tell you what.  A small nose brings with it some real disadvantages.  Because of it, I was never able to learn how to properly pick it.  Even as a wee one, hangin with my buds at the playground slide, I could never plunge even a knuckle deep to get at the good stuff like my peers.  At the time I was sure they thought less of me because of my lack of talent at nose mining.  But we all have to live with physical challenges and I have learned to deal with mine.

Once I had recognized the unfairness of a small nose, my eyes moved to my eyes obscured by glasses looking back at me in the mirror.  I removed my glasses and leaned in hard to bring my face back into focus.  What's this under my eyes? Are those water balloons? I am packing some serious eye baggage.  Looks like someone stuffed a tennis ball under each eye. And the crow's feet at the corners of my eyes look like Big Foot stomped on my face.  Add in the scars I had accumulated from years of launching myself head first into almost everything I did, well, I have to say maybe that woman didn't look so bad after all.

I considered my previous horror upon viewing her for the first time while checking out my 63 year old mug.  The face that stared back at me with just a little make up, maybe a highlight here or some shadow over there, could land me an extra spot on "Walking Dead".   At least I did not have to pay one red cent to grow this ugly.  No sense paying for something you can do yourself.

An addendum to this post - For some reason the comments were turned off for this post.  Not sure what I did, but I must have pissed off the Internet gods or something.

Email ThisBlogThis!Share to TwitterShare to FacebookShare to Pinterest
Labels: Dredged from the Past, Humor, Keeper, Memoir., Personal, Pop Culture

"Couldn't they just label it "addiction to cosmetic surgery" and be done with it? "

So many face lifts the bags under her eyes were her breasts and there was no need to ask about the goatee.