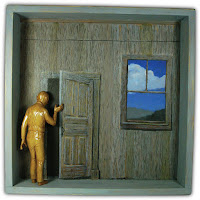 My existence owes a debt of gratitude to a rowdy cocktail party sometime in the summer of 1951.  I found out or surmised all this when connecting dots while sifting through important papers after my father died in 1980.  My parents at the time were both single.  They hurriedly married a few months before I was born.  I confronted my mom after my dad passed with my Eureka moment and all she said was, "It certainly took you long enough to figure that one out."  Or words to that effect.

I was not shocked nor shamed.  Shit happens.  Especially unplanned pregnancies in the 1950s.  The realization however that I was conceived out of wedlock filled in many missing pieces regarding my interactions with extended family members, especially on my mom's side.  I never felt comfortable as a child nor as an adult at family gatherings.  I felt shunned.  When I became an adult, I reciprocated and cut them out of my life.

While I was not shocked nor shamed, I did get pissed off.  My anger at not being let in on the secret when I was younger was short lived.  I decided that as a child I would have been poorly equipped to deal with information so sensitive.  And I realized, just how does one tell their kid, they are a mistake and the result of socially unacceptable passion.  Now days it would be easy.  In the 1950s and 1960s, not so much.

I am grateful my mother chose to carry me full term.  But at what price?  I grew up in a house with no love in it.  Or not much anyway.  I will always wonder if my mere existence created the misery my parents bestowed on each other while I was growing up.  I don't stay up nights worrying about it.  But I do wonder.

All this brings me to my very convoluted and conflicting opinions surrounding the hot topic of abortion.  Prior to knowing how I came into the world, I was a hard core advocate of the right to abort.  Once I realized that I had once been a prime candidate for the procedure and dodged the bullet, my view has softened.  I am still strongly pro-choice.  But if asked my advice, I would do what I could to help the prospective mother carry her child to term.

This may seem hypocritical or sitting on the fence, or I don't know what.  The right of the individual to dictate what happens in their own body supersedes my opinion that Abortion should be the last tool used to resolve an unwanted pregnancy.  The State and organized religion should stay the Hell out of it.  First and foremost, I am for individual rights.  Supporting the mother without judgement is the best thing I can do I think.

Email ThisBlogThis!Share to TwitterShare to FacebookShare to Pinterest
Labels: Dredged from the Past, Family, Memoir., Pain, Personal

that makes me sad...but look how you turned out..and we all love you.

Ah, I was a war baby but never held that against my mother (it was a family secret), I seem to have ended up with better genes and have outlived my siblings. Booze, helping people get laid for thousands of years.

it is all a crap shoot: Chaos. There is no plan. No idea who my father is and don't give a damn. Hope they both enjoyed the experience - and if I had not been carried to term - or had ended up as a blow job then the world would have moved on just like it will when I am gone.

We are not that important - a spec in a dust storm - a drop in the ocean of the cosmos.

I'm here and I try to enjoy it.
the Ol'Buzzard

This has been said before and will be said a million times more before the religious right catch on. Best way to reduce abortion is to prevent unwanted pregnancies mainly through education and also to provide oodles of support through and after pregnancy, right to adulthood. That is truly pro-life.