The End is Near Again 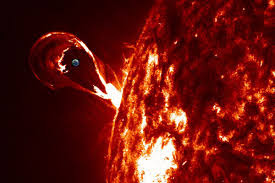 We survived the recent Mayan Apocalypse.  We all breathed a sigh of relief when the Rev. Harold Camping was wrong, 12 times wrong, about the Biblical Armageddon breathing down our necks.  So far, the planet and its puny sentient race has managed to dodge the big bullet.  At some point though, I wonder if one of the voices from our fringes will make the correct call.

A fellow, who we will call Mr A, came into my bike shop the other day to buy a rack for his bicycle.  I have known this guy for a couple of years.  Mr A is definitely a citizen of the fringes.  I like him, but his take on Life is different than anything I could have come up with.  When we share topics regarding bikes, he is as normal and mainstream as the next guy.  When he expands the conversation with lead ins like, "Do you believe in UFOs?" - Well, I know what follows will at the least be entertaining and sometimes scary.

This visit when the bike topics had been worn out, he blurted, "I suffer from insomnia."

Oh boy, here we go.  I braced myself.  "Uh, yeah, I seemed to have picked up that bad habit recently myself."

He looked at me.  It seemed he was pleased that we shared more than just an interest in bicycles.

"Well, I decided to drive out to Colorado to try some medicinal marijuana to see if it would help me sleep."  He quickly added, "Not to get high, just looking for some help."

I stood there nonplussed looking for something to say.  "Jeez, Mr A, you can get pot anywhere nowadays, and besides from my own experience, I have had mixed results from smoking doob for insomnia."

"It would be illegal for me to smoke it here."

Again I was nonplussed and said nothing.

Mr A then proceeds to give me his blow by blow account of his trip out to Colorado.  A mechanical failure in Iowa, how amazed he was that Fly Over country was so flat, and then his  negative experience with weed out in Denver.  Turned out, it didn't help him sleep.  It made him even more hyper.

It became apparent he was just leading up to what he really wanted to talk about.

"While I was driving, I listened to talk radio and what I heard was disturbing."

Something told me to end the conversation, but he had laid a skillful trap of engagement.  "Disturbing?"

Mr A then started in on the latest end of Life prediction tearing up the internet periphery.

Apparently some retired military guy who ran a top secret military operation dealing with psychic phenomenon informed his late night audience that he and his team had developed a technique to see the future.  And the future, specifically the near future, is not good.  Super Solar Flares will envelope the planet sometime late this year or early 2017.

The world wide grid will go down.  Starvation, Disease, Anarchy, Marshall Law and planet wide wars will collide resulting in a loss of over 6.5 billion lives leaving only a few green pockets of livable space in which to continue our existence on the planet.

Mr A finished with, "Does knowing this bother you?"

The intense look on his face stifled any thought I had of laughing.  I stayed silent.

I did not think a man's eyes could open any wider than his were then,  Yet, he managed to bug them out even further.  He leaned forward across the counter.  "Well ...... Does it?"  He wanted an answer.  And from the contorted shape of his face, I knew that if I wanted to end this conversation sooner than later, I better say the right thing.

"Uh, well no, I guess it doesn't."   As it turned out, I nailed the response to safely end this out of control conversation.

Mr A's eyes went from madman amazement to madman evil guy, all squinty and lips curled.  ( Okay, so maybe his face was not that crazed, but at the time, his face was a scary place to visit).  He shook his head and said quietly, "It should bother you.  Solar flares are real."  He grabbed the rack he had bought and walked out.

I watched him cross the parking lot and climb into his beat and dented 1990-something Saturn.  Smoke billowed from his exhaust when he cranked it over.  Backing out, his power steering pump squealed like a pig when he turned the steering wheel.  As he drove past, he tossed a disgusted look at me through the door of the bike shop.  And then he was gone.  Just the stink of an engine not combusting probably left to remind me of his visit.

It's days like these at the bike shop that are the whipped cream on top of the joy of retail.

These people are around even in Maine; but when you pass the Mason and Dixon line heading south this thinking becomes the norm - we left Kentucky right after the millennium - all the churches had been preparing for the rapture as they were sure it was the end times. The people seemed nice enough, but it was like lining in a Steven King novel - nutsville.
the Ol'Buzzard

The Buzzard's right. As for End-of-Days scenarios, it is the charismatic Christians' desires to reach that time that most scares me with their Presidential candy dates. Let's not put the red phone and buttons in the hands of some moron who wishes for the Earth to be finished.

batshit people that are true believers in their batshittiness are really fucking scary.

It always makes me wonder whether people like that really believe the conspiracy theories. Do they honestly, in their hearts, believe it's true, or are they just entertaining themselves?

I mean, I'm religious, so people probably think the same thing about me.

It is always a bit scary to come face to face with someone who believes the nutty drama out there on the internet and in radioland. Sounds like he needed some real relaxation, maybe yoga and meditation. It could help him sleep and calm the wackiness down.

I always enjoy the company of these people. I look at them and think to myself "I'm OK"

Ol'Buzzard - I have always consider the doomsday predictions as harmless fun for folks who need that kind of support.

Mooner Johnson - Welcome. Yeah, those folks bent on the Rapture should not be allowed to play with sharp objects, especially the kind that blow shit up. I had not stepped foot in a Walmart since 1990 until the other day when forced to do so by my wife. I was impressed. Not impressed by the offerings, but impressed that Walmart had not changed, it just got bigger.

JACKIESUE - Mainstream treats them as eccentrics until one of them gets a hold of the reins somewhere.

Nasreen Iqbal - I think some of them hope the conspiracies, the dire predictions, and off the wall scenarios are seated in truth. For some knowing that it is us against them makes it easieer to justify their own shortcomings.

robin andrea - I did not mean to leave the impression that this guy was totally out there. Most of our conversations were rather mundane and normal. But yeah, I think he could use some theraputic down time of one kind or another.

mohaverat - You said it for me. When I question my own sanity, a conversation with someone from the edge of reason, re -grounds me.

In terms of Doomsday, it seems a non-issue for me... If it happens, there is not a whole
Helluva lot I can do about it... That is my usual stance.

Thinking further... as for marijuana... I suspect I am one of only a few folks in my neck of the woods that is curious about it but never has tried it. I would like to, but have not done so because back when I had easy access (college) I was unsure if I could "handle" is... I always imagined as being wonderful but potentially leading me to become lazier than I already was and not remain focused enough to finish graduate school. Now, decades later, becoming lazier is not a worry, but trying to find it is not so easy for an old guy like me. If I ever go to Colorado or Washington for a meeting... I will be certain to try it out in that easier to find environment... To at least finally know what it is like.