"Have we not suffered enough?! What have we done to anger the football gods in such a way that they send the (expletive) Patriots to us for Super Bowl XLVI?!"

That quote is from an Yahoo Sports online article written by Eric R Me, an obviously sore loser Colts fan.  Suddenly my intense almost and maybe even fanatical adoration for the expletive Patriots comes into focus.

I used to be a Colts fan.  Back when they were the real Colts and not the pretend Colts they became when Irsay packed up the team and slithered out of B-more in the middle of the night.  I knew I would never again root for any team using the label "Colts".  Not even my old little league team in Florida if they happen to be still there as the "Alert Heat and Cooling" Colts.  The name is dead to me.  You can thank Mr Irsay for ruining what could have been a life long relationship.  I even once defended the Colts in a parking lot drunken brawl with some Miami fans outside Memorial Stadium in 1973.  And so what if I had my ass handed to me that night.  I stood up for my Colts. 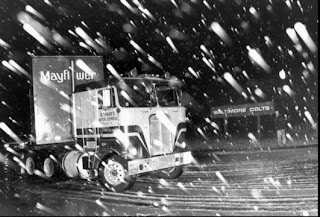 Even when I finally settled down with family, house and debt up the wazoo here in Maine, I remained true to my Colts.  I was forced into rooting for the Pats that fateful night in March, 1984 when more than a few moving trucks hit I-70 West.  It was not just being a jilted fan, but part of my livelihood had once been derived from the Colts.  The moving company I worked for when I lived in B-more used to handle all their moving needs.  I can remember more than a few moves from Summer training camp in Westminister, MD to Memorial Stadium.    I am sure Don Conklin of Advance Moving and Storage would have refused the job, or his crews would have.  So Irsay called in some out of town outfit to do the dirty deed in secret.

What fries my ass is somehow Indianapolis now gets to claim all the classic games played by the Colts when they were truly great under Johnny U.  The name should have stayed in Baltimore.  At least when Cleveland moved to Baltimore, Modell was forced to leave the Browns name and legacy behind.  So nyah nyah Mr. Eric R. Me.  Sit there pissy in front of the tube on Feb 5th and watch my Pats sully your field, your locker rooms, your town.  And even if my (expletive)Pats lose, I will still have my victory knowing they went to the big show and your team didn't.

Which brings me to yesterday's gladiators and how both games were contests of wills and luck.  Probably the best pair of championship games I have ever seen.  The Pats manned up and played the game the Ravens brought with them.  So what if it came down to a missed field goal.  Both teams played ugly old school football.  And it ended as many from back in the day did - the last mistake.  The following game between the Giants and the 49ers was almost exactly the same.  Smash mouth pummel them hard and see who is still standing.  And finally it too boiled down to - the last mistake.  That's the kind of football I was raised on.

It should be a Helluva Super Bowl this year, no matter who wins.

I promise I will come back to earth after February 5th.  But be forewarned, I feel more football posts sneaking up on me.

Email ThisBlogThis!Share to TwitterShare to FacebookShare to Pinterest
Labels: Sports

Best pair of championship games? It's up there, but that's something I'm going to have to devote much consideration to because it's important, not that you're necessarily wrong (2001 was pretty good, as was 1995, 1987, hmm, you might be right)

There are two left?

thank god there are Still Browns in Cleveland.

I don't give a shit who wins.

Randal - I guess What I was trying to relate was that this was the best double header championship I have ever seen. Two absolutely great games in one day. Nothing beats 2001.

BBC - Why am I not surprised?

YELLOWDOG GRANNY - I will say I would have liked to see Romo in the Play offs. He can be a dynamic QB.