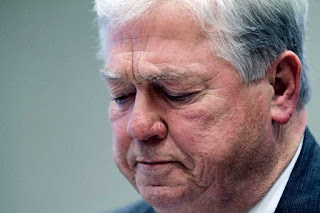 Micah 7:18-19
Who is a God like you, who pardons sin and forgives the transgression of the remnant of his inheritance? You do not stay angry forever but delight to show mercy. You will again have compassion on us; you will tread our sins underfoot and hurl all our iniquities into the depths of the sea.

I guess outgoing Gov. Barbour of Mississippi has been reading from the wrong sections of the Bible lately.  He recently created a shit storm in his state by falling prey to that outdated Christian weakness so many of his kind now successfully resist.  Like homosexuality, forgiveness is one of the many weaknesses many good Christians will do their best to distance themselves from because through the magic of modern day Christo-technology, they know that forgiving is a weakness and gays are made not born.   And gasp and oh my, here is one of their salt of the earth brethren caving to his weakness and issuing pardons to convicted sinners throughout his state.  The World has officially come to an end in Mississippi.

It matters not that of the roughly 200 people he pardoned, 180 were already out of jail and had been for some time.  What do the fine citizens of Mississippi think is going to happen?  That all of sudden now that these previous felons have clean records, they will immediately become criminals again, run amok robbing, killing and raping?  Get a grip Mississippi.  It's not that big a deal.  And good on you Governor.

And in the meantime 10,000 miles away, Marines show their disrespect for their dead enemies by urinating on their corpses.  War is ugly and this is just another facet of its ugliness.  But Dana Loesch, a rising blob of stupidity on the Right comments that she not only condones their behavior, but would "drop trou and do it too" if she could.  And again another brain dead cheerleader sitting safe and sound in her comfortable digs back home supports bad behavior by representatives of the US. 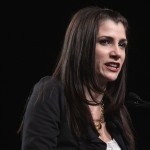 Dana Loesch.  How is it I have missed her all these years.  She personifies the twisted logic that has the Right by the short hairs.  She ardently believes the founders all considered Democracy a gift from God and that we were meant to be a nation of Christians.  Either she conveniently forgets or never even bothered to find out that many of the founding fathers were Deists.  Their belief in God went only so far as "he got this thing going, it is up to us how we run it."

Of course the notion of Deism is out of favor now..  You are either a god fearing freedom loving Christian, a freedom hating Atheist, or even worse a Muslim.  Pray our way and be free.  Pray your way and we will put our boot on your neck.  It boggles my mind that we even would think A god who was capable of creating what we have would even be slightly concerned over the petty bullshit we do in his name.  The dude's got a Universe to expand.  We are just not that important.

Just some randomness on Saturday morning before I hit the bike shop for another day of retail and repair.

The sad part is not all of the people that feel that way are natives of Mississippi. I have a relative living in MS who is a TeaBagger. She was born UP on the Tundra, but now lives in southern MS. Before I dumped her on facebook, I took her to task about some of her comments and her response was, "I'm surrounded by rednecks and they know where I live." Bullshit, you don't have to spread their hatred and bigotry simply because of where you live!!

Like the big cheese wouldn't love us more than Alien or Predator.

Strange country, you live in.

I read the other day that Arizona has banned ethnic courses from schools for "inciting hatred". apparently they deviate from the official "white European males" were God's gift to America.

BBC reported today that Romney was under fire for speaking French.

"She ardently believes the founders all considered Democracy a gift from God and that we were meant to be a nation of Christians."

But that's true, isn't it? Oh God, my cherished beliefs are being challenged again.

judas fucking priest..save me from Christians.

YDG, that particular prayer may well be VERY important in the years ahead.

Just a point of interest: I had an uncle who was governor of Mississippi back in the fifties - all of the people who worked in the governors mansion were inmates off of Parchman Penitentiary. All were black, all were trustees, and some had been convicted of murder. It was standard procedure to pardon them at the end of your term of office.
the Ol'Buzzard