My Take on the Iowa Caucus 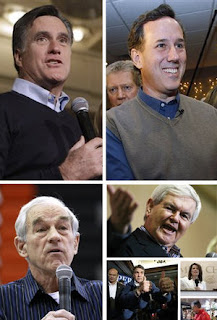 So the cream is finally struggling its way to the top.  Of course I offer my sincerest apologies to cows everywhere for using this comparison of the Republican Presidential race to dairy products of any kind, even clabber, which I might add is delicious if prepared properly.  I would have used the tired shit floats analogy, but then I have resolved this year to be on my best behavior when commenting about politics.  We'll see how long that lasts.

Romney's landslide victory of 8 votes over Frothy Man Santorum has to give him a warm and fuzzy feeling about his standing among the core of his party.  Even if they hate him, they will vote for him if it means there is even a snow ball's chance in Hell of ousting that loser in the White House right at the moment. Oh Happy Day.

For his part, Santorum is ecstatic to the point of speechlessness.  Let's hope he stays that way.  Don't hold your breath however.  You know he won't hold his.

In the meantime one Texan goes home sad and rejected.  Another Texan feels good about coming in third, and the whacko from Minnesota is still trying to figure out what happened.  Finishing next to last is not so bad I guess.  Just imagine where she would have finished had she not spent so much time in Iowa.  The word is her seat in Congress is a lock if she wants it. Her campaign lackeys insist her focus is on running for president.  That's the spirit Michelle.  Spending time jousting with windmills is so much more important than representing your district in Congress.

Newt left in a huff, an angry and petulant spoiled little brat.  Mumbling something about New Hampshire would be his because he was the only real conservative who did not lie.  Okay so I made that last part up.    But let's face it, Newt is such a blowhard who's ego dwarfs the combined egos of the rest of his opponents -  is there any other way for him to react?  He is doing this country a favor by offering to run it for us.  We should be grateful.  I'm sure he looks at it that way.

And even though Jon Huntsman did not run in Iowa, he still got 745 Iowans to give him a thumbs up.  He is concentrating on New Hampshire and asking the voters there, " to upend conventional wisdom and hand him a victory on January 10."  Hmm.  The term "conventional wisdom" seems an oxymoron coming out of the mouth of a Republican candidate.  But I guess if running on policies that have been re-looping like an old 8 Track tape these past 30 years is conventional, then I guess there is some wisdom in there somewhere.

Next up for the All Republican Comedy Revue - New Hampshire.  Be there or be square.

Just put my own predictions out there for public ridicule, hope you'll drop by to laugh and point.
Watch for Noot to get all stabby in the next few days. If he has anything positive to say about Mitt Romney between now and the South Carolina primary I'll kiss your ass and give you an hour to draw a crowd.
This is gonna be SO MUCH FUCKING FUN!

I like Ron Paul.
Glad it is you folks and not us. We have our own problems. Ukraine has 91 political parties, all on a list basis. Votes are by party, tallied, seats divided and then the parties line up to sell out to the most likely candidate for government.
Winner takes all. Loser goes to jail.

It always gets more interesting as the candidates are winnowed down. Thankfully for our enjoyment (and the fodder for Jon Stewart and Stephen Colbert) there are still several certified loonies running and it certainly will be fun, I agree!

I'm enjoying the clash between Ron Paul and Frothy. Frothy wants to invade as many countries as possible as early as possible, and wants a huge all-seeing Big Brother to patrol everybody's morals 24/7. Paul is a Libertarian. I hope these two (and their supporters) split the GOP right down the middle and send the party over a cliff.

My grandmother taught me that if I couldn't say something nice to not say anything at all.

IT'S ALL OVER ANYWAY.

Ron Paul is not a real Republican. He is a libertarian and should run as an independent. That would be a party split I could get behind.

Dammit, this just means with the South Carolina primary approaching I will have more idiots calling me during the day while I am trying to sleep.

In all honesty I should just unplug the phone but I do so enjoy playing with the supporters by asking them questions about their candidates and their intelligence for backing them.

One guy called about Rick Perry a few days before we went on vacation and I asked the man why he was supporting a moron. He just laughed without saying anything and I then said well you must be one as well and the guy hug up.

Just because Ron Paul's followers claim to be libertarians doesn't mean he is one. He's a Grover Norquist-type FuckingRepublican. Paul and Frothy-boy Santorum agree on abortion, if that's a libertarian, I make you the same offer as Squatlo!!

A single stance on abortion does not a Republican make. Ron Paul is a libertarian.