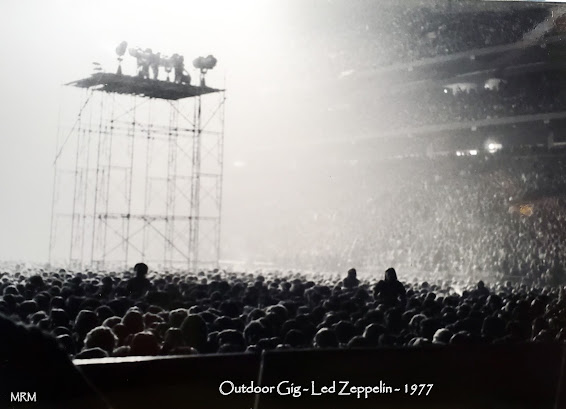 I took this picture in 1977 when I hauled Rock n' Roll shows all over the US and Canada. I picked it solely because it was an image of a crowd, which seemed at the time to have a connection to the idea of crowds who coagulate because of shared interests. It might make some sense once we get further into the post. But then again, it might not. It is dark thirty in the AM and I am not all here. Part of me is still on the couch sleeping where I passed out way too early last night.

So I have recently found the social media world I am part of offers me less fun and recreation than they use to. I spend, uh, waste most of my time on Facebook. There are issues for sure, but they are consistent issues and frankly I feel FB is a much more intuitive operation for Booming fumblers like me.

I am still a registered user on Twitter. But I am probably done with the twits on that social media platform. Less than 12 hours after I joined, I was sent to their "Your account is inaccessible until midnight" jail. A few days later I found out who really runs the place. Twitterville is overrun by righteously indignant gangs who will descend on you in a heartbeat; throw darts at you, and then block you so you cannot reply to their over sensitive take on how the World is run, was run in the Past and certainly should be run in the Future. Those folks seem proud of the stick they have up their asses. Besides, navigating Twitter sucks. Yeah, I am probably over Twitter.

I tried another social media site. It took me about a New York second to realize I had entered the heart of White Wingin Nirvana. I lurked for awhile just to see what their lizard people do when they get together with no humans around to muss their hair. A couple of weeks into my visit they indicated they would be asking me for my credit card because what they offered was somehow worth money. I skedaddled as fast as my icon punching fingers could punch.

I had resigned myself to a tolerable existence on Facebook as a stop gap. I understood it. I rarely found myself in Jail and I had friends. I began to enjoy Life again and pressed on, happy as if I had a brain.

Then "Occupy Democrats" put an ad on my feed pushing a new social media operation called "Tribel". Their enticement was finally there was a social media outfit who knew what I wanted out of the social media world. Plus if I joined now, I would or could be a founding member. Sort like an ad form my youth that used the statement "Be the first kid on your block to...".

Whatever they did worked. I was weak and looking for something else.

Tribel seems to be a progressive, libtard paradise set up to, well, give us woke folks a place to hang out with our own lizard people. Just like the Wingers, we know we are special too. I have only been a member now about a week maybe. So far, I have not been impressed nor have I been unimpressed. My jury is still out.

I never liked this tune and still don't. But it seems obviously appropriate for this post about Internet tribalism. It's always easier and less stressful to preach to the choir and insulate ourselves from any potential for ugliness or challenges to our take on the world.

And though I really, really hate this tune, for your consideration, " The In Crowd ", by Dobie Gray, 1965. Proof that not all Boomer music was not the cat's meow. 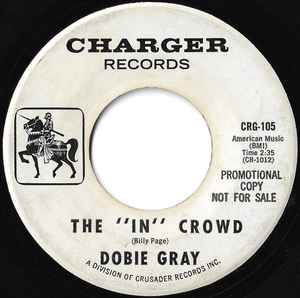 Email ThisBlogThis!Share to TwitterShare to FacebookShare to Pinterest
Labels: A Perfect World, Dredged from the Past, FB, Music, Personal