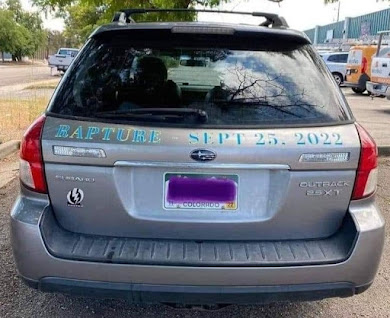 I wanted to come up with a post of Biblical proportions. I had to settle for my usual poorly proportional outcome. I believe planets have converged and stars have aligned in such a way that today is the day, the day all Christians meet God in his/her house high up in the clouds where the antelope play.
It's Sunday today and maybe today the planet finally divests itself of many whining holier than thou cross bearing troublemakers around the globe. They have been looking forward to this day forever. Today I hope to hold the door for them so it doesn't smack them in the ass on their way out.

Today is the beginning or the middle, or maybe the end of  "The Rapture". I never could get the timing of this auspicious Christian fantasy straight. None of the various evangelical sects can agree on the details, the date, or what it means in the end. Yeah, they do have a hard, cast in iron loose set of guidelines in that factually challenged but rule specific book known as the "Holy Bible". Being holier than their neighbors in the church on the next block, they twist their take to their liking regarding the Rapture, Judgement Day, the Crack of Doom.

I understand that one of the hard and fast rules is the Rapture will occur and only "good Christians" will be allowed on board. This is a pretty straight forward rule. Everyone who is anyone in the evangelical culture seem to agree on this point. But as in the rest of this book of contradictions and nonsense, what makes a "good Christian" is left up to those interpreting its meaning; especially if one draws their life lessons from both books found within. 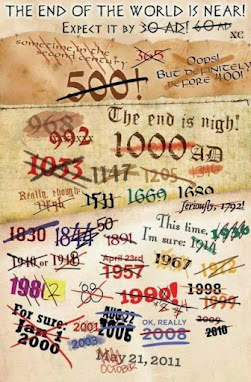 A Bible Thumper in Colorado has decided today, September 25, 2022, is the day all good Christians will have their tickets punched. Tomorrow they will wake up at the Pearly Gates where toothbrushes, toothpaste and shampoo will be handed out. There will be no need for towels in Heaven as there are at least two body blowers distributing God's breath on the faithful on every corner. The Thumper knows this as fact or they would not have spoiled the lines of their beautiful Subaru "Outback" with their message.

My question to them is how does a surburban dweller of the Denver area know today is the date when so many more sanctified holy rollers who are closer to God's elbow were always wrong. The Rapture has had an infinite number of start up dates and so far, it has failed to launch.

I keep rooting for them to be right at some point. Sooner would be preferred than later. If they vacate the planet, that will lead to less confusing contradictions worldwide and the card carrying atheists might just shut their pie holes about there not being a God allowing the not so perfect, but friendlier Christians God leaves behind with bragging rights.

My hopes have been dashed before. If there is no Rapture or at least a pre-game warm up, my tattered hopes will have to wait for the next sure fire prediction. Seems to me the odds have to be narrowing. At some point they may just get it right.

BTW - I always wondered where the term "gird your loins" came from. I always knew what it meant but not of its origin. As it turns out, it is a befitting title for this Rapture post. It has its origins in the Bible. ........ Of course it does.

Again it's "Google's Choice" for the musical pick. I am punching up "Rock music about the Rapture"

The Alternative/Rock band, "Hurt" offers up two versions of the same song. One is a metal/rock version and the other is a fine acoustic version. I could not decide, so here is both. 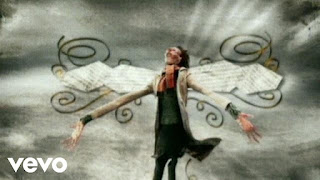 If it ever happens there will be a lot of christians showing up in heaven with shit filled pants. :)

The world without religious nuts would be heaven!