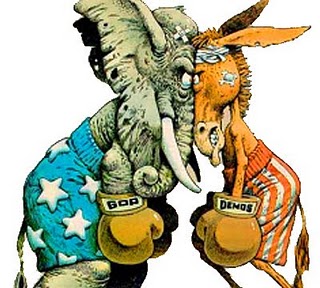 I recently broke one of my rules regarding the Internet.  I opened up and read the comment section of a political blog, the Drudge Retort.  I then went further down the rabbit hole by actually commenting on a few articles.  What was I thinking?  I gave up fencing with idiots many years ago.  Yet, here I was trying my best to bring sense into an arena where common sense has no place.  Yes, among the frothers and hate spewers, there were voices of reason.  But they were, as they always are, shouted down with brainless party hack regurgitations from minds obviously well soused with their side's kool aid.

I read an article by an ex- Republican congressional staffer.  He agreed with my view that the current "right wing" is not conservative, though they like to make the claim.  The article's main thrust or point was about the lack of compassion emanating from the right side.  Well written and insightful.  Check it out.

But back to conservatism and the Right.

I am cursed having been raised in an old school conservative family.  Goldwater conservatism was cutting edge stuff for my folks.  My mom always contended that conservatives were not against change, just that good change evolved naturally and not in knee jerk bad legislation like the Democrats were inclined to push.  Slow change vs Rapid Change - the main differences between the two.

Along comes Reagan and suddenly Conservatism begins to mutate.  Instead of trying to keep a lid on change that came too rapidly, now the new Right wanted to turn back the clock.  Return to some fantasy world that never existed anywhere but their own minds.  At first it was mostly harmless rhetoric meant to gather the party loyal to defeating the evil Democrats in their quest to turn government into a nanny state.

Yet behind the scenes, there was a cadre of bad losers with power or power in their future who planned to get some payback for what happened to Nixon and what resulted afterwards.  Suddenly the party became mean and spiteful.  Compromise became a dirty word.  It was their way of the highway.  Any dissent within the ranks was shot down immediately.  It was during this period, the term "RINO" became so popular.  Winning at almost any cost created the current Republican notion that the end justifies the means.

Fast forward to today.  The neoconservatives of the Reagan and Bush years have been replaced with right wingers even further from the center than they were.  Conservatism now has to make room for radicals who feel that keeping a lid on things is not enough.  Now they must institute change that will cause this country to plunge into a period of true chaos and danger.  And if they cannot institute the changes they have in mind, they can certainly bring things from the slow crawl we have been in these past 30 years to a grinding halt.  In that they have been successful.  Look at the absolute gridlock in DC at the moment.

What bothers me the most I guess is that I still feel most of America hovers around the center.  The polarization we see now is a fabricated one designed and created by fringe elements of both sides, with most it coming from the Right.  Running this country should in no way come down to stupid issues like Abortion, Gay Rights, Gun Control, or Christmas Trees on the public square.  Yet, we seem to have allowed these superfluous issues rise to the top as the issues that define this country.

In the meantime, the rest of the World gets on with it's business and leaves us choking on it's dust.  And it galls me that the too many people on both sides just do not seem to care.  They would rather piss down each others leg instead of helping this country become strong enough to begin to handle the issues they want handled.

Here in Franklin County we have an on-line newspaper called The Daily Bulldog. The comment section has been co-opted by the the lunatic fringe. I don't bother to post there any longer because the same few will rant over and over. They are beyond reason.
As far as the intelligence of the American people: intelligence is demonstrated on a bell curve - and the people on the bottom side of the curve are breeding faster than the folks on the upper - skewing the intelligence quota downward.

Winter has finally come to Maine: hope you are enjoying it.
the Ol'Buzzard

We're not players, we're just observers and we're surrounded by fucking idiots. I'm working toward mocking it all.

What about my rights to keep and bear gay Christmas trees?

I'm with Randall....when we ban Gay Christmas Trees...why golly, only bears will have guns.

The News is no longer NEWS.... it is all just shuck and jive from the lower shelf at the Kwiki-Mart.

If you want to read the opinions of the true bottom feeders of society (from the absolute shallow end of the gene pool) check out the political section of Craigslist. Knuckle-draggin', mouth-breathin' breeders.