One Futurist's View from 25 Years Ago 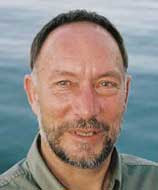 Randal has it figured out I guess. For some reason the other morning I did not feel like posting anything. I did not feel like there was anything in Mike's world that was of interest that day. The World was busy doing what the World does. All of the events that pass by us on a regular basis that individually have no real impact on our lives. Births, deaths by disease, marriages, divorces, traffic accidents. Events that happen to others more often but will eventually turn up at our door step also.

For a good run down on the basics of what goes on all around us, I googled "World Clock". Probably should not have because I found this site. There were other sites I could have punched up. Google gave umpteen thousands of choices. I picked this one. I had visited sites like this before, but none of them had the information set out in this kind of order and with this exact type of information.

As I write this, the world has grown by 72 million souls to over 6.7 billion people. Over 12 million Hectares of forest have been cut down this year against only 5.3 million hectares replanted. Over 28 billion gallons of oil have been pumped and over 25 billion tons of CO2 created. Over 42 million abortions worldwide this year and so far we are closing in on 54 million people dead. Over a trillion dollars has been spent on military expenses. Almost 700,000 people have died because of violence and war (150,000).

All of this is going on as I write and sit safe and sound in Acton, Maine. The numbers are so huge they have become the proverbial forest from which it is very hard to discern the trees. The absolutely huge numbers become almost incomprehensible to me. I read them without feeling or sadness. I know I should have some kind of emotional response, but I just don't. It is as if I cannot believe them.

The site does say the figures are based on approximations and estimates made from previous data. So the figures are not absolutely accurate. Fine. But they ring true as I sit and watch the number of births outdistance the number of deaths. They ring true when I know just the US is spending billions to keep itself armed and ready for what I am beginning to wonder about.

The site was just about ruining my day when I also punched up a link in this site. "The Global Brain" is a relatively short video (maybe 35 minutes) by this guy Peter Russell. I knew nothing about Peter Russell before this. I actually still know very little, but will now try to find out more. This video, made in 1983, is really interesting. Hard to describe other than he takes us through the life span of the planet with the planet as a living organism. I will have to watch it some more to grasp even a little more of what it is saying. It is a compelling piece to say the least. And not so much the bummer watching his clock was. It points to a great future if we play our cards right.

But back to the clock. The clock is definitely a sobering indicator of how as a group we humans spend our time. And true to our evolutionary and yes religious roots, we do one thing and do it well. We create more humans. With all the ways we have to kill ourselves, kill others, and leave others to die from a variety of preventable maladies, we are still putting more humans in play than we take out. According to Peter Russell our numbers have not yet reached the tipping point yet based on his idea of molecules, DNA, and lower formed structures. Somewhere around 10 billion people is the magic number. Magic number for what? I need to see it again to really get a handle on that.

What strikes me about this video is it was made 25 years ago. Pre-Internet, yet he lays out the Internet in front of us like he knew exactly how it would play out. I could not but help considering how bloggers play an important role in his vision.
Posted by MRMacrum at 11:55 AM

Email ThisBlogThis!Share to TwitterShare to FacebookShare to Pinterest
Labels: Blogging

If I have something figured out, you better tell me so I don't forget.

The extreme cynic can look at the World Clock page and, with the 10 billion number in mind, feel we need to spend more on the military and find new and excited ways to get diseased faster so we can cause more accidents.

I'm not a glass half-full dude, but we've got the resources to at least lessen the fuckery a bit. Too bad.

That world clock sure is depressing. I've seen sites like that before. Not pretty.

I haven't clicked on that Peter Russell link yet, but those past projections into the future are always interesting. When I was little I had this big picture book of cars, and they had this full-page picture called the "car of the future." It looked like a space ship; something out of a bad sci-fi movie. I'm still waiting to see a car that looks even remotely like that picture.

I hope all these grim predictions are in that same category. We'll see...

Actually, his video is not just dire predictions. He predicts positive things for us as a species if we turn the right corners and do the right combination of things. Not related so much to climatic or green events as it is cultural growth. It all seems to be based around the idea of a global conciousness of which the Internet we have now is right in there doing what it is supposed to do.

It is 35 minutes well spent in my opinion. Liked it enough I am going to see it again.

Did you ever watch SOYLENT GREEN? I hope so, because that is how I see the future. We will either breed ourselves into oblivion or get wiped out with disease or an itchy finger on the nuke button. Either way, the future is SO bleak that I cannot fathom anything good coming.

I will now go smoke dope. I will be back when I am inoculated against total gloom. I may pass on the clock, but I like what you say about the video so I will be back.

At the moment I'm on the wrong machine to view the video this one is not configured for sound or images. I'm one of those guys that was heavily online even before 1983 so I'm not surprised by any inkling he and others had of a global network, nu '83 there were quite a few of us that had been communicating 24x7 globally for years.

Populations and time lines.
The news just yesterday or the day before that they had finally real vaccine for malaria that will allow millions that would have died as infants or children to reach weapons carrying age in the tropical, over populated, starving, regions of the world.
Yep that was the cynicism that passed though my head for a second at the good news of a vaccine. I couldn't help it.

On the flip side of what you wrote one could consider the CO2 liberated not created and it sounds like someone did a good thing.
It really is a good thing that 5.35.3 million hectares of tree were replanted that was better that used to happen and shows a kind of progress in the midst of a spiral down a toilet.

response to dana; My exposure to the reality of ABC warfare in the Air Force made me realize that what we used to call Atomic war was the least frightening, and in the long term the least harmful.
What we call nuclear weapons now are not world ending machines, the might damage our DNA but we are doing an even better job of that with petrochemicals that any level of atomic war ever could.
I quit fearing "the bomb", it's a boogie man.
That said we should try and reduce the number of them on the planet because they have no practical use as a weapon of warfare, even as blackmail.

The World was busy doing what the World does.

Yeah, and that really pisses me off.

The world clock is much like the dooms day clock. I've been watching it for years.

I'm not sure that these monkeys can make the right decisions to change things around.

But it's not all bad, it just means that when the dust settles that there will be a lot less of them.

That's okay, spirit is okay with that, as long as there are some left to start over again in wiser ways.

Some years back, early 70s I believe, I was reading a book called the Limits to Growth written by a group of scientists from around the world. By their predictions based on population growth we should have run out of resources some time around 2000. I read the book one more time to fact check before throwing it away.

I think the only thing we need to work on at present is global warming. If life in the oceans starts dying then you know we are not far behind.