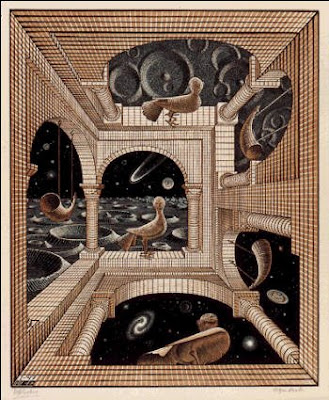 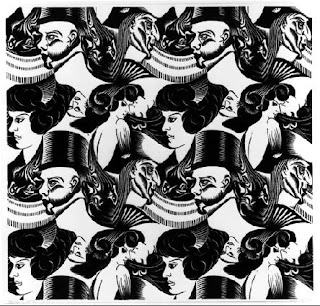 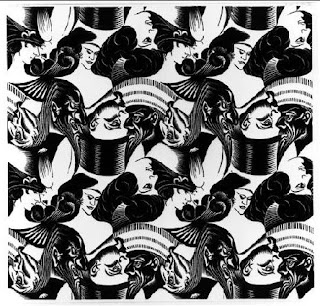 My parents had a very cool book when I was a kid. They had many cool books, but this one was way cool. It was a book my father had picked up while he was stationed in Post WWll Germany. It was a book of pictures with foreign writing. I don't read or speak foreign tongues, but I definitely liked the pictures. They were images of optical illusions. Some were photographs. Some were artistic renditions. It was this book that first introduced me to MC Escher. There were a few of his efforts in it. Ever since I have been fascinated with images that played games with my eyes.

That book has long been gone. Lost on one of our many moves, grabbed by one of my siblings, or loaned out and never returned. It's impact on what kind of images I like to look at was profound. Later on with the advent of pop art, my dad began to collect images that came from the minds of people who had to be on acid. Wavy checkerboard designsthat started out as stills. The longer you stared, they would begin to move without mechanical help. Perspective treatments that sucked you into the image. I can remember gazing at MC Escher's "Waterfall" while tripping and convincing myself it was not only a distinct possibility but an absolute fact. Reality came the next day when I looked at it again after coming down. I decided that Escher had not really figured out a way to defeat the Law of Physics. But his mind's eye had. 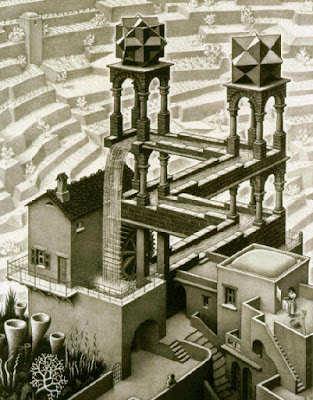 At this point after fooling around for who knows how damn long getting the top two pictures to load on the published screen the way I want them to, I cannot remember what first got me started on the subject of optical illusions and the exercise in futility they have so far rewarded me with. Per my usual loose dog ways, I have been completely sidetracked down another fork in the tangled morass of mindless trails to where I am now. The original point now just another tidbit in my brain pan full of crumbs. I made the mistake of getting lost in looking at all the works of Escher's on his official website. Many I recognized, but the majority I did not. I am actually now more impressed than ever. His fool the eyes thing and repetitive pattern thing were but a part of his overall work. Some of his etchings and woodcuts were just excellent renditions of whatever. For some reason, I found "Wild West" to be one of my favorites, which hopefully you will find sitting patiently and behaving itself on the right side. 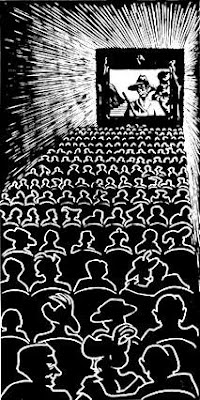 But enough on Escher. If you want a great taste of his work visit the link at the top. I also found this site that spotlights the double illusion thing wonderfully. According to the site, depending on your age, the image you see will be different. Young children without the life experience of intimacy between adults will see black dolphins swimming and not a couple obviously enjoying themselves. Youthful innocence saving them from visions of horrors to come. 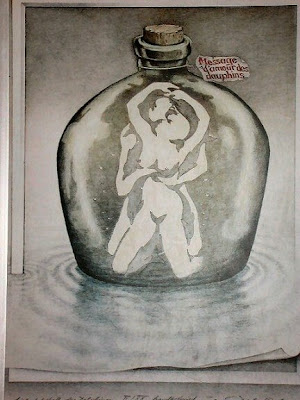 Another wonderful site I found was this one. It is a gallery of optical illusions, many of which are interactive. Really cool stuff man. I mean dude, spark one up and lose a day. Where was the Internet when I was poisoning myself with all those nasty substances back in the day? Settling for hours of staring at the Tattooed Tit of Christianity in Washington DC as it melted into liquid colored wax seems so much more like work than switching between trail inducing visual entertainments with the click of a button.

An excuse filled afterthought - Some posts come hard because I can't find the right words. Some posts are held up while I search for hours finding just that right image to go with them. And then some posts, like this one, are begun as a lark. The intent to come up with a quickie by poaching from sites better than mine. But when I am hoping to spend only a brief moment or two satisfying my blogging jones because reality is insisting on my attention, creating something quick can turn ugly in an instant. And it will have nothing to do with creating, but more a problem of mechanics. Like a Front Derailleur on a bike. Front Derailleurs are probably the simplest moving part on a bicycle. Yet a smooth repair and tune can quickly head south when a Front Derailleur decides to not cooperate. They can turn an experienced mechanic into a quivering mass of tears and lost hair. This post today was that kind Front Derailleur. So I will close poorly and without much zip. Just enjoy the images that did not want to lay down quietly and behave like they should have. 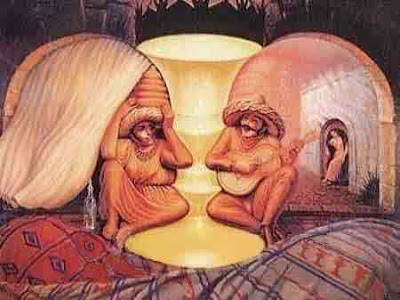 Email ThisBlogThis!Share to TwitterShare to FacebookShare to Pinterest
Labels: Bike Shop, Cycling, Favorites, Sanity, What is It?

GARGH! I've finally found someone, SOMEONE, who knows about op art!! Oh God MrMacrum, we are SOOO OLD. Being (well, starting out as) a graphics designer extraordinaire, I first started dabbling in op art in high school. After a full day of listening to the nuns drone on about the relevance of catechism in our changing world, I'd have pages of pipes that were coming out, no, in, from the edges, or grids that rotated to the eye. Kinda made me want to vomit they were so good.

Then came the fad of those pictures where you were supposed to stare at until you saw the "ship" or whatever. I never did see the "ship" and always wondered if it was a sham.

I really fear that I'm too OLD to look at these for very long. Your photos have just thrown me into some kind of "is this another cruelty of aging?" since they make me a little nauseous now. HELP ME!!! This is cruel!!!

Thank you SO much for joining me in my past. I will definitely go to your links. You are my newest hero.

p.s. YOUR banner is more what I wanted MY banner to be: ALL the way across my page, but I'm ok with mine.....temporarily.

Sorry for taking up so much space, but I'm doing something I am ashamed that I didn't do before: Putting your blog on my blogroll at my site.

Sorry....*cough* come back to my site and scroll down to my BLOGGERS BLOCK on the left and see what I called you.

Optical illusions are very interesting, so are optical delusions.

I too loved Escher. Loved getting lost in that fantasy world of illusion. Going up the down staircase upside down. I also liked to pretend that I was small enough to hide in a pocket, like Thumbolina. I made whole towns with a deck of cards. Symphony orchestras with buttons from my grandmother's button jar.

Are you lost in the bozone and really lost this time?

I remember my 8th grade math teacher introducing me to Escher. Loved him ever since. One Christmas my aunt gave me three of those "tabletop" puzzles where you shuffle tiles to complete a puzzle (usually to put numbers in order) but they were Escher images instead. Think it took me two hours to do them. Freaked my aunt out.

Your front derailleur can act up any time it wants, as far as I'm concerned.

Okay, now I'm getting worried about you.

Those were so great. Thank you for sharing.

See, utah, I'm not the only one that croaks. I think the good proprietor decided to mellow out with his stash and stare at the groovy pictures. At least that's my working theory.

dana wyzard - Not all the pictures on the one site are painful to look at. I won't try to live up to any high hopes. But I do appreciate the good word and the linking thing.

BBC - Seems we tend to suffer more from delusions than illusions doesn't it. Optical or otherwise.

Utah Savage - Thumbelina? I remember fantasizing about being small also. I bet every kid goes through it at some point. Wanting to fly was another big one. Oh and living in the woods as one of the creatures, an otter comes to mind.

Not lost Utah, just letting my brain simmer for awhile.

Bull - It would seem that Escher's work would be appreciated the most by young minds not cluttered up with the boxes older minds get trapped into. My dad never lost his fascination with escher type art. My mother would rather have looked at some flowers in an old wine bottle. Or definitely a seascape of any kind.

Leon Basin - thanks for swinging by. Glad you enjoyed them. Definitely brought back some memories of my early years of discovering art.

Randal Graves - Taking time off to recharge is gonna happen. There is a real world out there. I thought I was using the blog to recharge for it. Now I wonder which one is control.

I love Escher's work. I have a book of his pictures somewhere; I haven't looked at it for awhile.

(I meant to comment here earlier; somehow it got away from me.)