The Uptown - Best Fight Ever 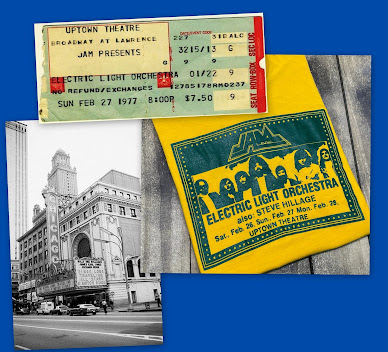 At the end of February, 1977, the ELO tour finished the month with a three day gig at the Uptown Theatre in Chicago. After these shows, we had nine days off and then back at it for the rest of March.

It had been a punishing tour for everyone. My only hope was to finish out the tour with less drama than had centered on me previously. My truck and trailer were fixed, I was full of renewed dedication after having almost blown it in Erie. So closing in on Chicago had convinced me it would be a cakewalk from here.

My first effort to find the Uptown found me looking at it after an hour of navigating streets not meant for semis. The problem was even though I could see the theater, the north south running El hung at about twelve feet off the road between me and the gig. At least I had plenty of time to regroup, form a new plan of attack and end up on the right side of the tracks. I was parked street side in plenty of time for stage call.

The three days in Chicago passed without much fanfare. I thought so until I recently found a remark I had scrawled in the margins of my ELO itinerary next to the Chicago dates:

"Kung Foo"- and then under that, "Best fight Ever" - and suddenly I remembered.

I cannot remember their names now, but I was sitting in my cab with the two T-shirt concession guys waiting for the show to close so I could back in to load out and they could man their Tee shirt and swag table for the exiting crowd. The Tee shirt guys were a buddy duo who had been in Vietnam together and were now in the Tee shirt business together. Being a sanctioned "official" vendor of ELO Tees and other swag, they frowned on the pirates who haunted the venues marketing inferior knock offs. I once watched them beat a competitor senseless at a large venue, I cannot remember where. Needless to say, they would cheerfully use thier fists to mark their territory.

So, we are in my truck.  They were sharing a six Pack, I was not. I never did mix alcohol and driving trucks. I was a very loose dog when off, but not while driving. I was probably sucking on some coffee or a soda I poached from the Green Room.

A small man came out of the alley I was to back down. On his heels two more small figures came running out of the alley and jumped the first guy. They began to awkwardly put on a sad rendition of a kung foo fight.  It became very clear that all three were more than half in the bag, they were all shitfaced. Maybe every 3rd or fourth blow landed and often without much effect. The victim gave as drunkenly as he got.

This went on for several minutes. Meanwhile one of the Tee shirt guys begins a Howard Cosell style commentary on what was unfolding 30 feet from the truck. It was hilarious until it wasn't.

At some point, the two assailants manage to get the victim on the ground. At this point they had forgotten any Kung Foo magic and were busy kicking the victim in the kidneys, the legs, wherever they could land a kick.

The Tee shirt guys became concerned. The funny dialog stopped and one of them began to open the door. The other one grabbed his arm and told him to wait a second. He saw something I guess that I and the other Tee shirt guy missed.

The victim was not as down and out as we supposed. When the two assailants stopped to catch their breath, the victim got up and kicked their asses. Not just a minor beating, but a call the ambulance type beating. One of the duo managed to make his escape, but his buddy ended up in the ambulance.

The whole fight lasted maybe five minutes total. The three of them could not have weighed more than 120 pounds each soaking weight. But as it turned out one of them definitely was able to fight above his weight class. His obviously superior martial arts talent prevailed. Oh yeah. The original victim was put in handcuffs until the Tee shirt guys and I offered our take on the fight.

Damn, the odd things I have witnessed from inside a truck.

should have charged admission