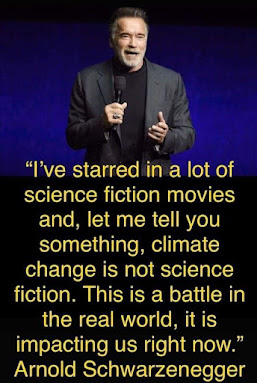 Early this AM before I fed the animals or made fresh coffee, I grabbed a cup of day old joe, mic-ed it, sat down at my desk and opened up Facebook. I had not even worked the night grunge out of my eyes, yet here I was scrolling through the posts with a chip on my shoulder. I did not remember details from my dreams the night before so I had no hint why I woke up on the wrong side of the bed. But I did.
A familar irritation had taken root again. An irritation I developed to a keen edge over the last 6 years when the Right compounded their ever increasing stupidity and pushed a moron into our lives.
I came across a quote post attributed to Arnold, one of the few Republicans I still have any respect for. You can read it there on the right.
The lead in comment by T*:
"The earth isn’t stagnant. Climate change has been happening since the dawn of time."
At the bottom of 70 plus replies to T*'s classic Winger go to Troll comment, I posted this:
"So would this be an excuse to not try to mitigate the worst effects? Certainly Climate Change or global warming has happened many times before. Does that mean we should just carry on and add to the damage? Or maybe start paying attention to a planet whose resources are being used up at an ever increasing rate. Maybe start looking to clean up our nest that we have been shitting in for so many millennia."
I was pleased that I did not let my shoulder chip get the better of me. I made my point and left. ..... Left that is until I got here to my relatively safe space I call "The BoZone".
It was not surprising the ardent climate change advocates were sucked in by this low hanging fruit. This was a post on a purportedly science leaning group page. Folks posted graphs, charts, and probably held pointers as they scurried to get their replies in front of the audience.
What surprised me was climate change folks continue to reply to the audacious Winger troll bait aimed at owning the libs and progressives because that is more important than anything other than kissing the orange man's ass. These clueless minions of the Right have nothing tangible in their support quivers most days, so they make shit up, obfuscate reality and fact with unitelligible replies, or just use a bunch of  fuck you emojis.
The problem with these worthless Winger taunts is they work. These clowns are able to stir up the local Liberals on a facebook page with drivel and nonsense.  And even though I have recently vowed to not get sucked in, here I was sitting in with 70 others who had Sunday Morning Outrage.
Keep it 'tween the ditches ................................
Posted by MRMacrum at 9:03 AM

The far right wing political ideal, in last 12 years I haven't been impress with anything from far right.
I stay low from facebook it just brings out the anger in me. I don't need that.
Coffee is on and stay safe