Cutting Them Some Slack 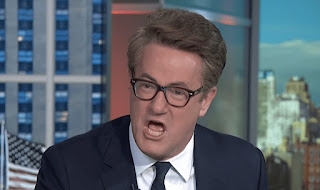 Morning Joe is still pissed off at his party. But now he has tempered his criticisms of the GOP as a whole and divided the GOP into two sections. We have the Insurrection Party or Trump Cult as the loudmouth infantile representatives of the Right and the more main stream old skool, calmer and cooler now Republicans who had been momentarily swept up in Trump Mania these past six years.

Instead of beating on all Wingers, Joe has allowed old favorites like Mitch McConnell and Lindsey Graham some major slack of late. It is disappointing, but not unexpected. Joe is a genuine to the bone, Right Winger. That he was and still is so anti Trump and his minions just proves that not all Wingers went insane. It also proves that if one hates Trump, that does not necessarily turn them into a commie pinko libtard, no matter what Fox News says.

He is beginning to ask that the Republican party be considered separate from the Qanon style madness attributed to them by the Left.

Bullshit. It is nothing but the old excuse used and abused by religious and political leaders to deflect any blame for the horrors done in the name of their religion or political party.

" Not all Muslims are terrorists." or " Not all Republicans are Trumpers."

These are true on the face of the statements. But the responsibilities of leadership does not stop there.

If leadership fails to try to rein in or, at the least, condemn the extreme factions of their group, they become enablers which makes them no better than accomplices. When a leadership stands mute while many of the faithful run amok, their silence is more often than not taken as tacit approval of the craziness acted out in the name of the group.

This is why I am disappointed in Joe. He is taking his heel off the throat of selective Wingers too soon by using a tired excuse that does not hold water. As long as the insanity within the ranks of the GOP continues its out of control trajectories, the whole party bears responsibility.

Hand wringing and mealy mouthed insincerities do not cut it anymore. The Republican Party owns Trump and all that has transpired as a result of his presence these last six years. And as far as the historical repercussions, they will own those forever.

Hey Dude, finally got some real alone time to explore the old blogs!

Truthfully, Morning Joe has creeped me out for a long time. Despite what Joe might like to claim, I watched him enough to know there were several years he was little better than Trump. Joe spewed essentially the same level of right-wing garbage.

Then when his affair with the married Mika went public the man started making me sick.

If Joe was still in Congress he would be indistinguishable from the rest of the Trump cult.
the Ol'Buzzard

Beach Bum - well hey there stranger. Good to see a friendly face from the past. Yeah Joe has always been an unapologetic Winger. Just at the moment Mika is keeping a tight rein on him to an extent.

Ol'Buzzard - Maybe. All I have to go on now is his negative attitude regarding Trump and the GOP. He has been consitent in his criticism until recently IMO. But yeah as I said he is in his heart a Winger from the panhandle of Florida which is as darkly conservative as any place south of the Mason-Dixon Line.

anyone that is still a republican after the past 4 and 1/2 years..is an asshole.