The Tortoise - An Almost Completed Dream 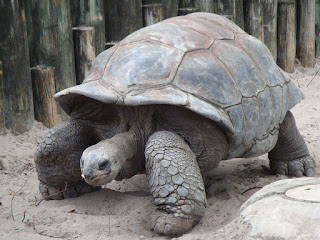 I went through a phase some years ago when I was sure I had stopped dreaming.  I know of course this is not so because everything I read about dreaming is that we all do it, all the time.  We often just do not remember doing it.

Well, I missed dreaming.  Or rather, I missed my ability to recall a dream. I found myself waking up and immediately wondering if I dreamed this time.  Then about a decade ago, I began to remember pieces and parts of sleep time adventures again.

Okay. I had re-established the fact that I still dreamed and that the dreams were as odd as they ever were.  Now I wanted to remember them enough to write them down.

So, this is my best recollection of what I dreamed last night between trips to the toilet to pee.

Suddenly I found myself in a van. Of course I was driving.  After all this was my dream. With me are several unrecognizable people. Their faces were vague and blurred, basically just three voices talking at the same time. I couldn't tell what they were talking about.  They seemed to be enjoying themselves, so I concentrated on the deteriorating rural dirt road we were traveling on. It quickly became a road set at a steep angle to the side.When I looked out the right window I looked directly into the ditch.

No one seemed concerned other than me.  The blurry faces were too busy talking and laughing.  I decelerated because of the embankment and we began to crawl along at a couple of miles per hour.  Up ahead I saw a tortoise in the ditch huffing it the same direction as we were going.  As we slowly passed him, I could not take my eyes off him. Only a last second yank on the steeering wheel kept the van from going into the ditch.

The Blurry faces in the car stopped talking.  As if on cue, eyes appeared on the blurry faces. They glared at me for a second and immediately turned back and fired up their conversation again.

I said, "Hey, calm down assholes. You just missed something you won't see again any time soon."

I wanted to stop and check out the tortoise. But there was no safe place to do so.  The road had become a goat path, leaning this way and that. I was now faced with a real possibility of rolling the van.  Magically, or because I am such an awesome driver in my dreams, I lifted my legs and the van kind of jumped and landed tires first on a road of asphalt with proper ditches on both sides.

Before I could get back up to speed, a house appeared on the left that had not been part of the upcoming landscape before I saw it.  Suddenly it was there with a proper driveway, a huge two car garage and many gabled windows built into the roof of slate shingles.

I pulled up the driveway and right into the garage like I lived there. Leaving the chatting trio in the van  I got out and went into the house by the front door.

Entering a huge foyer, I stopped and considered where to go first.  I heard voices straight ahead.  Down a hall and into a den or family room filled with worn out furniture. An older couple was sitting on a couch watching TV.

Without any introduction, I started right in. "Do you know you have a tortoise walking this way.  It can't be more than 100 yards away.  It's huge.  Big as a spare tire.  Must be 100 years old I bet."

The old man turns in my direction and waves me off with an insolent and smug shake of his hand.  He points at the TV screen and turned back to watch it.  I stood mute for a few seconds considering how no one was interested in the huge tortoise outside.  It pissed me off.  I moved in front of the couple and blocked their view of the TV.  In unison, they looked up at me.  Again I stood mute.

The old lady finally says, "Well, what is it?  You're blocking our TV."

My eyes opened and Maggie's nose was about three inches from my face.

Damn!  But I smiled, scratched Maggie behind her ears and immediately set to remembering the dream.  And now here I am having successfully retold as complete of a dream as I ever have. Total accuracy is a bit sketchy, but its close.

Good morning everyone.  Getting off to a great start.

Dreams are cool, at least mine are...

Nothing is as restful as dreamless sleep. Perhaps you have lived a more peaceful life. My dreams are always chaotic.
the Ol'Buzzard

I know I have actually been asleep when I get up every two hours because I can remember my dream. Dreams that end before I wake up I don't remember. Most of my dreams are about real people usually in strange circumstances but sometimes real, just 40 years ago. I never dreamed of a turtle before. Maybe tonight I will. Aren't turtles part of First Nation folklore about America?

BBC - Dreams are indeed cool. Hence my reason for remembering them.

Ol'Buzzard - Dreamless sleep may be more restful. But dreams are more often than not more entertaining even when they are chaotic. When I was young, not a kid, but in my 20s, I used to have dreams of being chased by angry people. Once while being chased, I came to what looked like a waist high hedge. I jumped over it to hide. Once in the air and able to see my landing spot, I noticed it was hundreds of feet straight down. Since I was committed, I went with it and did a tuck and roll upon landing. I stood up, looked up, and flipped the bird at the crowd chasing me.

Interesting dream! I am hit or miss in remembering my dreams. Sometimes I do..... but not always. I hate the nightmare dreams that I occasionally have.... I wake up, and sadly, usually remember those..... and feel so exhausted that it feels like I did not sleep. Makes for a rough day. And even though I thought they would be gone with my old codger status, I still surprisingly have sex dreams..... even though I am a bit bemused at them, apparently I am sometimes moving about in the bed in ways that aggravate my wife and she often pushes at me until I wake up. Depending upon her mood at that time, she sometimes (sporadically) is willing to allow me to turn that dream into a reality, which is very helpful, but sometimes..... no, she is just annoyed. ;) And, ever since I gave up my pipes, I have probably had the most number of dreams I remember, and sometimes they are damn vivid too..... of pipe smoking, with many of them being where I am a worker at a pipe shop after I retire.

Pipe Tobacco - Yeah, dreams have always been one of my favorite activities. Sadly, I usually only remember bits and pieces. This was one of th emost complete dreams I ever remembered. This morning I woke up with just a partial memory of my wife using one of my tools the wrong way and she ruined it. That and it had to do with installing stair treads of all things.

Well, I did not dream about turtles last night. I did not sleep until about 5:30. Making me angry early did not do me any good. Once I get steamed up I cannot sleep. the time difference to NA is what gets me. About 1:00 am I got a video from a long time friend of Tanya's and mine that informed me that Covid 19 did not exist, that no one had ever isolated the virus, and that no one had died from it. It was all the flu. It took a couple of not pleasant responses to settle that matter. Then I saw on FB a post from a woman I had known since she was a child repeating the usual loony left stuff about neonicotinoids causing Colony Collapse Disorder in bees and how terrible neonics were. So I got it from the right and left. The later took several exchanges as her friend chimed in before I shut it down. There is 20 million acres of canola seeded in western Canada treated with neonics and our honey industry is thriving. I am now working on a blog post about neonics.
My son phoned me at 4:30 am as he knew I was still awake and threatened to get his sister's PhD thesis and read it to me until I went to sleep. I will shut my phone off tonight and take two sleeping pills. To hell with the world.

Blog Fodder - Yes, sound like you need to decompress.Maybe keeping your son on call to read your daughter's thesis might be a good idea. BTW - Never heard of neonics. Have to look them up.

I think that was a fascinating dream. I love the fact that I can be dreaming, get up, go pee and come back to bed and continue the dream.

Jackiesue- I have on occasion managed to go back to sleep and continue the same dream. It does not happen as much now as it used to when I was younger.