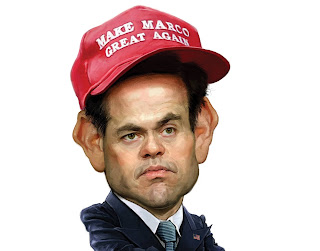 So, I was listening to Little Marco Rubio, US Senator from Florida, spout off this morning about US companies putting negative pressure on the State of Georgia regarding their recent legislative assault on the voting rights of Georgia citizens. He called Coca Cola and Delta Airlines "Woke" corporate hypocrites because they continue to do business with China, while here at home attack the very institutions Americans hold dear and near. I assume he meant the voting bill in Georgia as if it was somehow good for America.

I literally choked on my coffee when I heard one of the nation's biggest hypocrites call anyone else a hypocrite.  And in keeping with the shameless ways of the GQP, he said it with a straight face.  I couldn't see his hands.  I imagine he had his fingers crossed.

His point centers on specious GQP logic that Coke and Delta are using false idealism to pressure Georgia.  They are not. It is all about their bottom line. They want to keep the money flowing into their coffers.  Any threat to that flow needs to be addressed.  And believe me, boycotts are a serious threat.  Not so much for the actual lost business from losing customers, but the negative Public Relations that result and haunt them for a long time after. They don't care about voting in any state.  They care about losing money and most of all, market share.

Corporations survive on their ability to deal with the various pressures of their markets.  That they may reflect the attitudes of their customer base is not hypocritical, it is just business as usual.   There is no hypocrisy, just what can they do to improve the bottom line.

And rather than call out Georgia himself, Little Marco Rubio insists on being the good Republican by pointing fingers at someone other than his own party.  He attempts to make it seem that Coke and Delta have become pawns of the Chinese in their quest to defeat America. The real enemy of America is the GQP. And Marco is eagerly and enthusiastically spreading the Right's destructive propaganda.

What a worthless, lying piece of shit Marco is.

What, no bible quotes from the #Christopath?

Maybe we'll get lucky and it'll turn out little Marco partied with Matt Gaetz. He spouts the Bible so much that there have to be some good goat pictures stashed somewhere.

Marco is just obnoxious. Nan’s comment was wonderful and gave me a hearty laugh!

and cruz...and Abbott and oh fuck the list goes on.