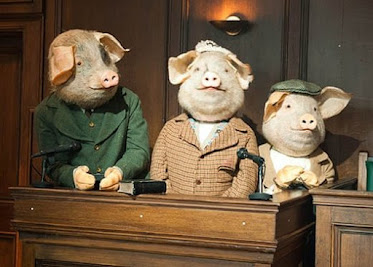 My brothers and I have been trading memoirs these past few months. The different ways we three have approached our memoir activity reflects I think basic outlooks we each have regarding our time on this planet.  Think of the Three Little Pigs.

My brother D is methodical, chronological, and logical in his approach.  Start at the beginning and tell the story as he remembers it unfolding.  I am jealous of his ability to line up his life so cleanly in his mind. I'll call him the Brick House Pig.  D's the guy who sets a goal and with nose to grindstone works on it, whatever "it" is, until realization.

J has offered brief vignettes that do not necessarily connect any dots chronologically, although his stories do favor the early part of his life. J is the Stick House Pig. He was focused and successful, but always looked fondly at the grass on the other side.

Me? Well I am a loose dog.  There is no logic or continuity between the tales I share.  When I am reminded of something from my past, I write about it.  Memories from the age of first awareness to some less than a decade old and everything in between. And yeah, I am the logical choice for the Straw House Pig.  I'm the brother who wandered aimlessly through Life trying to latch onto that next bright object. The butterfly catcher.

Three brothers of the same mother but different fathers.  Three brothers who were well prepared for Life by imperfect parents who struggled with their own demons. Three brothers who approached Life on their own terms.  All three of us have had victories.  We have all experienced failures.  But each of us lived our lives without livng in each other's shadow.

I love this so much. as an only child (half sister who I didn't live with, and step sisters as an adult) I didn't have siblings. part of me is glad as I was such a daddies' girl and the sharing his love would have made me a different person than I am now. But I sorta miss not having someone to share my experiences with. But that would have made me different than I am now too..so guess it all worked out.

Great analogy. My memories, too, are all over the map. My mind is like a pinball or a ping pong ball in a tornado

I'm an only child. So I guess I have none or all these trait.
Coffee is on and stay safe

Jackiesue - My brothers were 12 and 13 years older than I was. So essentially I was an only child most of my childhood during two other adults would drop in from time to time.

The Blog Fodder - Then you can definitely relate. Loose dog to the end.

peppylady - I too was really an only child. My brothers were much older than I was.