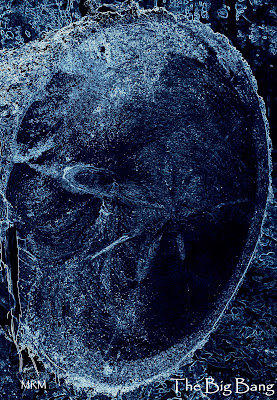 This Kodak moment I snapped a few weeks ago was a rather pedestrian image that did nothing for me until I messed around with it.  Once I had it at this point, I considered what it reminded me of.

After some contemplation I decided that it reminded me of what scientists describe as "The Big Bang" theory of the beginning of the Universe.  Everything inside the circle getting organized while the outer wave swallows all the loose matter in its path.

I know the theocratic views favor different scenarios, but they all seem to indicate no matter what happened, it was a sudden event and everything we know expanded from this beginning.

I have no clue why the various takes create so much friction, hate and discontent.  The beginning seems such a stupid thing to squabble over.  But then humans aren't happy unless their panties are bunched up over something.

BTW, for anyone interested, I posted a piece of flash fiction over to "BoZone Too".
Posted by MRMacrum at 3:21 PM

Email ThisBlogThis!Share to TwitterShare to FacebookShare to Pinterest
Labels: Blogging

JACKIESUE - Yeah, you are an evil pot stirring Pinko.