During a season that is supposed to be about the joy of life, giving and goodwill to Man, we should also take a moment to reflect on those who have lost, are lost, and will continue to lose in the future. 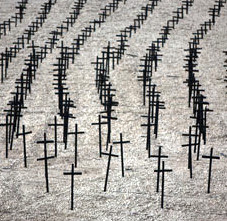 Hovering over Pauper Grave #242, uninhibited tears fell onto the single white Chrysanthemum Jack clutched in his hand.   Six inches of snow had found its way into the cast off Bean boots someone threw at him from a Lexus.  He did not even notice.

It was six Christmas Eve’s ago he had identified the body of his hard times friend.   Closing his eyes, Jack could still see Rodney’s gap toothed grin after they had constructed their last blue tarp cardboard palace together.

Jack tossed the Chrysanthemum on the grave and watched it disappear into the fresh snow.

Maybe it was my recent re-read of Steinbeck’s “Tortilla Flat”.  Or maybe it was today’s NPR piece on the Homeless Vigil held in Portland, Maine around Christmas every year.  Toss in some white flowers and there you have it, something to write about.

Whatever reason ya’ll have for celebrating, please enjoy it, savor it, and carry it as far into 2018 as you can.

Cross posted at  Lostin the BoZone, Too
Posted by MRMacrum at 1:11 PM

Email ThisBlogThis!Share to TwitterShare to FacebookShare to Pinterest
Labels: CR99

I am so damn glad you are writing again! It am sorry you have had a very difficult year, but I send you wishes for a much much more happy and joyful 2018!

I am also going to see if I may be able to join the flash fiction site you wrote on. Creative writing always has helped me to a degree.

Pipe Tobacco - Hey, flash fiction is a hoot. Trying to come up with something readable in 100 words or so clears my brain cavity of some of the cobwebs. Beats some mind numbing game on the AARP site.

I read that piece on the NPR website (last Friday?) and all I could think of was why doesn't 'Homeless Person's Memorial Day' get any press? Thanks for writing and sharing this story about a group of people who - unless they're standing in someone's way - are pretty much forgotten :(

Micheal Fishman - It seems I only hear about them when there is funding to cut from a program they benefit from.

Your flash makes me want to reread "Tortilla Flats," as somehow I feel the meaning in Steinbeck's stories is going to become clearer. Not sure if that's my age or the feeling that we need to learn what we failed to learn in hard times. Such a brilliant love can exist between two down-trodden friends because they know the value of humanity. I'm thinking the Lexus boot-tosser does not get it, yet. Good to know your community holds vigil for the homeless. Sad to know they are without homes.

Charli - I think maybe the less a person has, the more valuable their humanity becomes.