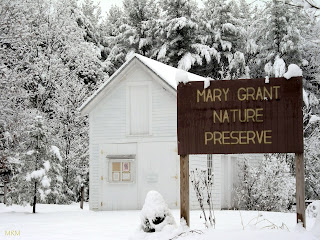 The sound of a tailgate slamming shut emphasized the fact that Mary and her family were gone forever. I looked across the road that separated our properties. Piles of dirt had replaced the 200 year old house that stood there 24 hours ago. Bernard pulled the dump truck out of the way. He fired up the Cat excavator and dropped the blade to fill the grave of a house. Mary's house. The ancestral homestead she visited many times these last 50 years. The house she hadn't slept in since the early 1970s.
When I see the empty lot she used to plant flowers in, I am struck by the sadness that was her existence. A lifetime she spent caring for her parents. A lifetime she feared to share with anyone else. And she died alone in a camp on Wilson Lake. I was called upon to identify the body.
I remember my panic when I saw the county cop walk up to my door. And then the relief I felt and later guilt when I found out no one close to me was involved. No one close? I was profoundly affected by that realization. Anyone close to her had died years ago. Her eccentricities had kept everyone else at arm's length. Even me. Ten minutes with her could be torture. Dogs barked and cats hissed.
It's sad. Mary was a nice person. She was caring. She was thoughtful. She was intelligent. But she was odd. Not funny ha ha odd, but strangely odd. All these thoughts ran through my head as I followed the cop to her rented camp. It was a cold raw winter day. Grey and threatening to snow.
The back door was propped open. Two volunteer emergency guys were outside looking pretty peaked. As soon as I entered the warm draft from the open door, I could smell why. The unmistakable stench that accompanies death. A stench locked up for several days at the least. I retched and backed up like I had been poleaxed.
I took a few moments to regain control of my stomach. As I hunched over and gasped for air, an emergency dude began to give me the blow by blow. More sadness. Mary had died alone in the bathroom. From the smell, he figured a week ago probably.
No one had missed her for a week. Her landlord in Massachusetts had been unable to reach her by phone and called 9-1-1 long distance. In Life and Death Mary had been alone. Not so tragic as it was a shame and so sad. A person deserves some notice. Humans need recognition and contact. A pet. Some fish. We all need something live to reinforce our own life. Interaction with others helps to ease the loneliness that would consume us if we did not have it. Mary's trip through Life surely verifies that fact.
So I sit here and write an obituary of sorts. A dedication to another lost soul. I have no tears. What I used to think was pity turns out to be sad realization. But for the love of my wife and daughter, the friends I have connected with, I could easily be in Mary's shoes.
Later ............................................
Posted by MRMacrum at 9:48 PM