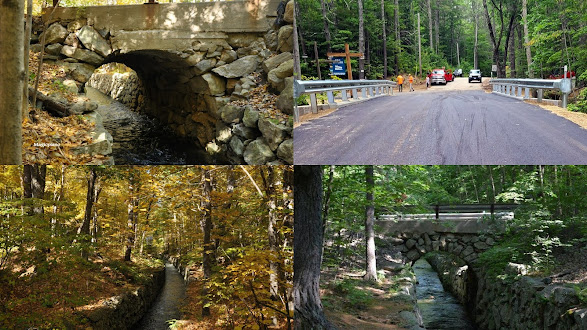 Its construction marked the beginning of a consistent water source meant for the mills downstream in Somersworth. More mills would pop up over the years in Rochester, Milton, Milton Mills and Acton. The first stones of this canal were laid without mortar in 1850.  Because of the Civil War, it was not finished until the mid to late 1860s. The canal and the bridge have existed mostly intact since.  And now finally, 170 or so years later, the bridge has been replaced.  Not bad for a stone bridge made by hand with no concrete except what was laid on top of it.

I first came to know this canal and bridge when I was a child visiting my Aunt Hellie and Uncle Herb Sibley at “Half Way Up Farm” in Acton several hundred yards away on the Maine side of the border.  My uncle would sit on some dead fall or a rock edge of the canal, smoking his pipe and keeping an eye on my eight year old self as I fished for brookies and chased craw daddies.  I saw my first otter there.

It was my time with Uncle Herb and Aunt Hellie that opened my eyes to a life without asphalt, millions of cars and the cookie cutter suburban existence I suffered most of the year further south. I never wanted to leave this peaceful exciting place.

And I guess I made a vow to come back and never leave.  I don’t know for sure if I did, but after some years spent working the wiggle worm out of myself, I finally settled in Acton in 1981. I have been here as a permanent resident for the last 40 years.  I married and raised a family here. I chose to make my last stand here.

I wouldn’t change a thing.

Fascinating. As a prairie by, the only canals I ever saw were for irrigation water and they were a long way from me. Nice to find your forever home. Someday I should like to visit Maine.

Blog Fodder - Yeah, Maine is definitely not the Prairies of Canada. Rather more like where Nancy and ray live in Yooperville. I have finally lived the city slicker out of me.

no canals but lots of czechs