My Second Email to Ted 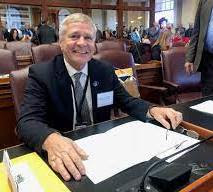 I received your Happy Fourth of July meme on Facebook yesterday.What a nice gesture from you and the local GOP. Thank you for that. You are a marvel when it comes to empty gestures.

It has been over a week since I emailed you and asked you about your vote on LD 557 and where you stand on the Jan 6 insurrection or the legitimacy of the November presidential election. I have not heard back from you. I am not going to let this go. Now that you are on my radar, you have become the bone this old dog wants to chew on.

Your failure to respond to my initial email has given me more time to acquaint myself with your record up in Augusta. Frankly Ted, I am less than impressed.  I was beginning to think you only knew the one word, Nay, when voting; then I saw that you had voted "YEA"  Jan 20th, 2020 to allow candidates to include a nickname on ballots. Sir, that must have been a tough decision. I applaud your courage.

Below is a compilation of your votes over the last two years regarding elections in Maine:

Now that I see your voting record on election related issues, I no longer wonder about how you feel. You have no interest in making the voting process easier, more accessible and user friendly. You are nothing but another GOP lackey following the edicts passed down from Trump and his cronies who now control the spineless Republican Party.  If I am wrong, please set me straight.  But at this point, I don't think I am wrong.
I don't want to over burden you with things to think about. So I will close with just two questions you should answer, if for no other reason than to separate you from the rest of your spineless Republican cohorts. Be a man. Speak your mind honestly. I just snickered when I wrote that.  Honesty and politicians are not two images that mingle well in most minds these days.  But please, give it a shot.
These two questions are not complicated nor are they "gotcha" questions.  They only become "gotcha" questions when you continue to refuse to answer them. By not answering them, you allow any conclusion one wants to make to be floated as a true rendering of your opinion.  Sort of like what I have concluded about your negative actions regarding voting rights and how you want to restrict them rather than expand them.
So far Mr. Kryzak your silence is deafening and telling at the same time.  I am beginning to think of you as a very, very sad excuse of a legislator.  And that is probably unfair, but there it is. Your silence gives me no choice but to come to that conclusion.
Change my mind.
Sincerely,
Michael Macrum, Acton
__________________________________
Contact Info for Theodore Kryzak - Legislative District 20, Maine
Mail:

Good work! You probably will continue to receive NO response..... but, regardless.... this is good work you did!

He doesn't even do a canned 'thank you for contacting me' reply? He is lazy, or maybe his minions have been trained to only respond to emails that praise him.

Not sure how your elected officials are in Maine. Our in Idaho is lost cause.
Coffee is on and stay safe

Pipe Tobacco - No response is a response I am expecting. And that's okay.

Nan - No high falutin automated or personal response team in place. Hell, Legislators in Maine only make $25K for TWO years plus $100/day the legislature is in session and they are present.

peppylady - Yeah, they are probably a lot like ours here in Maine. But I finally decided to start riding one to insist on them doing a better job. They probably won't, but I wll feel better for trying.

Good luck with that. Is there a newspaper you could pay to publish it? How can you make it more public? I suppose even shame won't work as they are shameless.