Bean and the Elevator 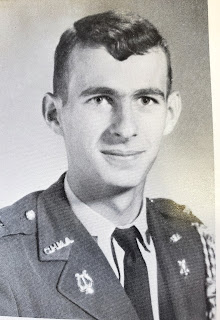 I posted a cartoon on my Facebook page this AM.  A crude joke involving bodily functions and an elevator.  I posted it with no comment.

I was hard into my second cup of coffee when I remembered a connection between the elevator in the New Dorm at Towson State and Bean, a best friend struck down before his time.  The cartoon I had previously posted became that much funnier and I laughed out loud again as memories of my old friend drifted in from the edges of my mind.

Bean and I attended the same military school in Charlotte Hall, Maryland. He was a senior when I enrolled as a new cadet in my sophomore year.  We did not really become friends until Lacrosse season.  I had never picked up a lacrosse stick and Bean, well, he was an awkward 6'5" stringbean who was not athletically gifted. Neither one of us were on the coach's top ten list.  We were fixtures on the JV team.  We had great fun making snarky remarks about well, everything.  Bean was a very funny guy.  He sure could tell a story.

Bean graduated in 1968 and immediately was filed as gone and soon to be forgotten.  I graduated from Charlotte Hall in 1970.

Two weeks into my freshman year I was cluelessly wandering around the Student Center at Towson State when I hear "Crum" shouted from across the big room.  Coming towards me in his signature disjointed walk was a hippie version of the Bean I knew in high school.  No amount of hair or tattered hippie attire could hide him. We became very close friends who often saw each other daily even though Bean was a day hop who lived off campus. 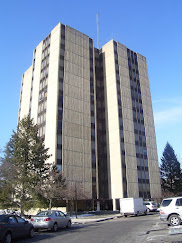 In the Spring of my Freshman year construction began on a new dormitory behind my dorm. It was to be 14 stories and when finished would introduce Co-ed living to Towson State.

Bean's and my first brush with the New Dorm was while construction was ongoing.  Because college students are really just big children, a construction site is still a big draw.  And we were drawn to it often as a spot to smoke weed and explore stoned.  The view from the top was outstanding.

Our very first exploratory mission started with me discovering what I thought was a huge closet on I think, the 3rd floor.  Baked out of my mind, I said, "Look.  A big closet.  Wonder what this will be?"

I stepped into it.

I had stepped into the main elevator shaft. Stepping into nothing is a very strange experience, especially when I noted the construction debris coming into focus at the bottom over 40 feet away.  I knew in an instant I was screwed.  Nothing I could do but follow the rules of gravity.  As I quickly approached face down, this is gonna hurt position, a hand grabbed the waist band of my jeans and pulled me to safety.  I am sure Bean saved my life that day.

Fast forward to when I was living in the completed, fully functioning New Dorm.  It was the first dorm Towson erected that was higher than 3 stories.  Mistakes were made.  One was inadequate elevator service.  Daylight hours found the only two elevators constantly in action and students having to wait for sometimes 5 -10 minutes.  The higher you lived, the bigger pain in the ass they were.  So of course on occasion Bean, Toole and I had to make the trip even more difficult when we could.

Since the people on the lower floors were used to dealing with overfilled elevators, we came up with our "Act Full" schtick.  An empty or close to it car would open for us on the 9th floor.  We would stand shoulder to shoulder as if we had been the last bits of human flesh able to be stuffed into this elevator.  "Now act full".  Nobody ever challenged us on the way down. We thought it was hilarious. However, most of the occasional innocent bystanders trapped in the same car with us were not.  I remember one nice looking coed calling us assholes when she walked out.  Oh well, college students are often assholes.  I will own my part in being one from time to time.

And of course I will never forget the time Bean farted in the elevator when it was chock full and he and I were the last people in for a trip to the first floor.  Bean looked down at me, nudged me with his elbow and then let loose with a deafening, lengthy, and odorous fart that slowly expanded to the rear of the elevator car.  It was a slow progression you could follow with your ears as it caused coughs and at least one noticeable gag reflex when it hit the rear wall. It made my eyes water.

So here we are not even to the 8th floor yet and Bean has gone and poisoned us.  I look up at his face and I see a face of beatific calm. He looked at me and winked.

At the 8th floor the door opened to a group in a hurry to get to class.  Several charged the elevator hoping they could muscle their way in.  Suddenly, as if on cue, they stopped like they had hit a wall.  One fella coughed and said, "I'll walk."  Floor after floor to the bottom it was like this.  All the while Bean stood there in innocent wonder looking around for someone else to blame.  As we stepped off he raised his hand and pointed at me and held his nose.  Asshole.

Damn, I miss Bean.  He was one of the greatest friends I ever had.  Sadly his life was taken in a farm accident in 1980.

I without a doubt. Would have loved him. I have gotten into elevator's and looked right at the person already in the car and said 'please, don't fart.'..

An entertaining read (except for the ending). My 1st year at CHMA was after your friend graduated. Always nice to have somebody fish you back out of an open elevator shaft!

Friends like that are hard come by. Good times. Sorry about the sad ending.

When I was stationed on Cape Cod I had a friend that would do the eye-watering farts. He would threaten people, "Shut up or I'll fart". He would buy and eat the pickled eggs at the bar and complain if he couldn't rip off a good one.

Also when I was working as a carpenter I worked with another notorious farter. We named the flashing around the sewer vent pipe after him. Luckily most of the time we were working outside.

Mac. Bean was my room mate at CHMA our senior year.. That describes Bean to a "t". I miss him as well. "Peter Potamus"