The Perfect Joint and a Circle of Hippies 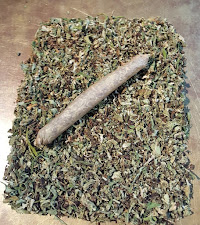 I was on You Tube looking for some "how to" videos a while back.  One video led to another, and before I knew it, I was watching  "The 10 things not to do with a Joint."  Funny how Google/You Tube manages to subvert your original search purpose by dangling enticing titles on the side bar.  Surely ten things not to do with a joint has to be of more import and interest than how to change a spark plug in a Jonesred chain saw or the best way to replace a rake handle.

Anyway, I punched up this tutorial about the author's notion of ten things not to do when handling, rolling, passing or smoking a joint.

While some of the hints and suggestions had merit, I could not get past the pitiful excuse of a joint the young ladies used as their main prop.  I watched in horror as fumbling tattooed  talons created what they obviously considered a righteous and acceptable smoke.

Is there no pride anymore in the artistry needed to roll a solid doob?  Where is the respect to all us aging hippies who perfected the techniques needed to produce a rail free joint that burned clean from first spark to that last ember burning the thumb and forefinger before dying a noble death?  Damn Kids.  No respect for tradition.

I perfected my joint rolling in military school rolling countless Bugler cigarettes in the dark of night to be consumed out of sight of upperclassman officers who wanted nothing less than to catch me with a butt and punish me ridiculously and embarrass me in front of my peers.
A pack of rolling tobacco was easier to hide than a pack of cigarettes. So when the commissioned officers came sniffing around with one of their snap inspections at dark thirty in the morning, I was usually safe.  I did get caught occasionally, but nowhere as often as some of my classmates.

So I graduated from high school and headed off to college. With my solid background in rolling cigarettes, it followed that I was a wiz when it came to twisting up a doob to pass around the circle. Just another face in the freshman crowd. It was not long before my joint rolling made me stand out.  I took pride in rolling a good joint and my results proved it.  My joints more often than not smoked evenly, were solid enough to stay together and were not so tight that getting a hit was like sucking a golf ball ball through a garden hose.

Along came 2nd semester and the speech class I signed up for.  Our final grade was based almost solely on our performance in three speeches.  I only remember the demonstration speech.  The other two are lost to the dust heap of historical doesn't matter.  The demonstration speech was one where we were tasked with not just speaking, but also physically demonstrating something we thought might be of interest to the class.

I agonized about this speech.  What was I going to demonstrate?  How to clean a M-1 rifle, another skill I acquired in military school?  Problem with that was I no longer had a M-1 rifle to use in my demonstration.  I voiced my dilemma out loud and all my roommate said was, "Teach em how to roll a joint.  You taught me."
Eureka! Problem solved. Waitng until the day before the speech actually worked out this time.  I was prepared by years of practice.  Now, all I had to do was write the words.
The next day, as I prepared my materials on the table at the front of the class, my introduction went something like:
"Fitting in in today's Hippie world takes more than the right tied dyed T shirt or Mother Earth sandals. If you want to hang with the long haired freaky people, having some basic skillsets in your quiver will go along way to cementing that relationship with that barefoot bra-less blond in the summer dress stuffing a flower in her hair. And while there are many things you can learn that will impress, nothing will create more admiration than rolling and passing the perfect joint in front of a circle of Hippies."
At this point I had all my materials ready.  I then began the process of rolling the perfect joint and explaining each part of the process so that anyone who paid attention could roll, if not the perfect joint, at least a passable one.  And though the instructor commented that my speech was inappropriate in a way he couldn't relate because he had never been faced with this kind of quasi illegal behavior. But he clapped, he smiled, and I got an A. Gotta love that Liberal Education.
Keep it 'tween the ditches ..............................................
Posted by MRMacrum at 9:29 AM

Email ThisBlogThis!Share to TwitterShare to FacebookShare to Pinterest
Labels: Answers to burning questions, Charlotte Hall, Dredged from the Past, Memoir., Memoirs

I never accomplished he skill so I use a pipe.
the Ol'Buzzard

Pipe Tobacco - Thanks. It was a hoot to write.

amidnightrider - Memories. Grand things with the right glasses on.

Ol'Buzzard - A pipe always works. I managed not to lose all I have owned.