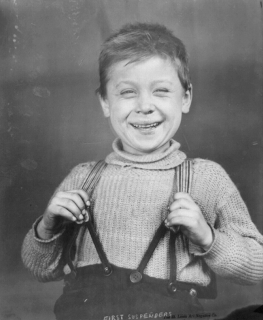 The story goes I wore my first pair of suspenders at age 2.  About the same time I wore my first hat.  Apparently I never looked back.   Both became part of what I was, what I became.

I always hated belts.   Yeah, they might work okay, but feeling like a garbage bag with a twist tie around the waist seems too high a price to pay.  Suspenders are the perfect support system.  Suspenders keep my pants at the right height.  No plumber's butt to shock the opposite sex and make friends laugh.  The gut is allowed to be the free flowing form it was meant to be.  Instead of  the two belly rolls a belt creates, suspenders allow an uninterrupted pleasing flow of the mid torso.  Nothing showcases a good gut like suspender straps on each side.

It boggles my mind that we insist on allowing skinny people to dictate what we full figure folks wear.  I used to be skinny and wore whatever I took a shine to.  As the years stacked up, I began to fill out into the classic WASP pear shape.   The loose fit of my pants disappeared through either their shrinkage or my expansion.  Most days I blamed the pants.  On those rare days when I was willing to cast a cold calculating and objective eye at the shape my body had decided to settle into, I saw Reality.

If I wanted to continue to wear my loved 'spenders, I would either need to buy bigger pants or bite the bullet and lose the padding I had worn out so many knives, forks and spoons to create.

Buying bigger pants brought with it several negatives.  First it was an admittance that I was actually getting fat.  There was also the notion that to buy big pants was giving up, giving in, throwing up my hands and learning to live Life the fat guy way.  Being a guy and well versed in the long deeply steeped traditon of denial, this truth was for a time buried hard back in the crusty dusty crevices and cracks of my mind.  I lived as a skinny guy on the inside and a fat guy on the outside.

So I crammed my bloated body into pants one size too small.  For several years no support was needed to keep the pants in place.  Just sucking in the gut once in the morning and fighting the button or snap into place would do the trick.  And as long as I didn't breath too deep or bend over too far, suffering the exploding pants syndrome was averted.  There were a few, maybe three, four, or more mishaps.  Embarrassing maybe, but not too high a price to not have to face the reality that looked back at me each morning I brushed my teeth.

Losing weight ........well, losing weight just seemed like too much of a hassle.  There was always something else better to do than cut back my time at the trough and instead do jumping jacks or crunches, or whatever it is the six pack ab dudes do to be able to bounce pennies off their gut like a well made bed in boot camp.  Sure it might turn on the honeys, but that kind of trouble had also become too much of a hassle what with being married to a woman who would have planted me deep if  I ever wandered off the reservation. 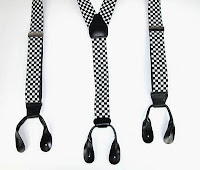 My recent and somewhat successful attempts to trim down the cubic feet my body took up brought with it a new optimism.  Thoughts of wearing those 34 waist jeans that have been gathering dust have been entertained.  And the 36 inch waist pants are starting to get sloppy.   Damn.  Finally back to needing a belt or ............suspenders.

I have an old set of LL Bean Red ones on now and they feel great.  I have begun to shop around looking for new and improved suspenders.   And again, the Internet did not let me down.  The Suspender Store is a online store dedicated to offering every kind of suspender you can imagine or think up.  Basic everyday 'spenders to high end Wall Street broker horsehair ones for almost $200.  They even offer promotion suspenders.  I could order some with my bike shop logo on them.  Now that would be cool.

I think my next pair will be some button style.  Pinch clips are fussy.  Button suspenders are a sure thing.  And I guess there's no need to sew any buttons on anymore.  Spiffy new high tech no-sew buttons are availble - six for six bucks.

Top image from The Library of Congress
Posted by MRMacrum at 11:12 AM

Over here in the UK, we call them "braces" and suspenders are what hold women's stckings up. I had this image of you in fish-net stockings and suspenders, g-string panties and a bra with tassles on. LOL!!!!

Wear your "suspenders" with pride, my friend.....and I'll try and rid my mind of that image of you.

When I was pushing 250#, I thought about getting suspenders. Now that I'm 40some pounds lighter, not so much. But if it works for you, hey, some people wear a belt and suspenders.

Back when I was still doing carpenter work I got suspenders for my toolbelt. That helped a lot, especially when working on a roof. It took the weight of the toolbelt off my hips and put it on my shoulders.

We called them braces when I was a kid, too. British influence, I guess as my grandparents got off the boat from Ireland in 06.

One time when I was young and in university, I wore 36-34 blue jeans and my brother wore 34-36 blue jeans. Afraid I have been a 44-32 for darn near 30 years already. Waist never changes, but I do suffer dreadfully from Dunlop's disease.

Anyone wearing a 36 waist is hardly in the fat zone.

Suspenders. Dang, why didn't I ever think of that? I've been a belt man for 25 years. Enough of that. My man Crum says the double ring roll around the waist is no more with suspenders.

David Barber: Now I have to rid MY mind of that mental image, too. Thanks a lot.

I've never owned a pair, but I guess that a slim and trim man has no need for them.

I guess my mother had me in a pair when I was about 4. I only remember because we kept them around in a drawer and used them as a sling shot some years later. When you're built like a stick figure most of your life there was no need.

Demeur, those at four were to hold up your strapless dresses yo momma put on you, hahahaha

Judging aesthetics and health based solely on circumference is complete B.S.