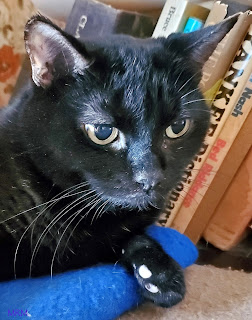 I have shared my life and my home with many fur buddies over the last forty plus years. Six dogs and too many cats to remember at the age of 70 have puked, shit, and torn up our home from time to time over that period. For every irritating stupid pet trick they pulled, I still came back for more. Pets, no, I can't call them pets; ..... my diminutive four legged fur buddies have enriched my life and probably when it is all said and done and I sit in an urn on the mantel as a pile of crusty dust , well, someone may just note that the furry members of my family kept me sane when I needed to be the most.

Which brings me to the new cat.

We went through a period twenty plus years ago or so when we were fostering momma kitties and sick kittens. At the time we had I am guessing, 8 or 9 other full time feline inmates we called our own. It was a madhouse of too many litter boxes and never ending barf detail. My wife, the accountant, can give you more precise numbers, but let's just say we were tripping over the little bastids. And contrary to the image that I am a contrary ole fart, I was loving Life. Bring em on. 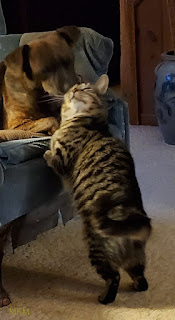 We found our limit. Told ourselves no more new cats. We successfully abstained from adoption or fostering until there was only one cat and one dog left. I reveled in the fact that we now only had one litter tray and the random acts of barfing had become almost non-existent.

But, the quiet and solitude would not last. After three years, neither my wife nor I were happy with just the two critters. We were happiest I guess when the house had more feet zooming around.

I waited for my wife to kick the new pet notion into gear. I waited because if it didn't pan out I wanted to not be the one who had suggested it ........ Nah, I waited for her because I knew she would not be able to stand it. She lasted longer than I thought she would.

Once the idea of a new cat had settled in, she began the online search for one from the available kitties at the NH humane Society where my daughter is the Projects and Program Manager.

She found a female cat she thought might be good. Named "Squiggle", she was two years old and all black. Black cats don't get adopted as fast as other cats.

So. we get her home and my wife has come up with a detailed plan to ease Squiggle into our small community. We'll keep her isolated for a time and then slowly introduce her to Maggie and Felix, AKA Peanut, AKA, Little Asshole.This sane introduction lasted two days and then anarchy ensued.

Maggie likes cats and apparently Squiggle is familiar with dogs and their stupid ways, so nothing more than some warning hisses that Maggie was all to happy to honor. The problems came when Felix and Squiggle had their first face to face.

We had been concerned about Felix attacking Squiggle as he is a tom and tends to strut around like he is some kind of badass. Now mind you, Felix might weigh in at an impressive 7 pounds. Squiggle might hit 5 pounds. Just to look at them, neither was intimidating in any way.

The first day barriers were cast aside, it did not take long to hear hissing and growling of the kind we know is probably accompanied by claws out slashing. Just as I stand up, Felix comes barreling downstairs while Squiggle sits at the top of the stairs looking demur and cute. She turns around and heads back to her throne on a dresser in the bedroom.

My little buddy is crushed now. His ego has been bruised and he knows Squiggle is the boss and he is just another asshole under her paw.

We have been through this kind of realignment several times in our past. Sadly Felix, AKA Peanut, AKA, Little Asshole has not. It's been 3 days now and he is still sulking.

I am getting better at finding tunes for my posts. Of course, now that I have begun bragging, my next choice will hide for hours. ......... Anyway, today's tune is "Bohemian Catsody". Not sure who arranged it. Enjoy!

Hah! Each new roommate exerts his/her own dynamics in the household. Our cat has never been able to become used to our dog (an admittedly very “enthusiastic” and hyperactive terrier type. She is so damn excited and enthused about the cat, that she nearly wiggles out of her skin in glee. Unfortunately, the cat does not read her glee positively and runs and hides in the basement when she is seen by the cat in all her frenetic joy. The cat, “Max” likes very much that we have a lot of doors that partition off rooms…. for he travels in the various rooms of our house only when the dog is not in that room.

When I was young, I had a HUGE cat (some sort of tabby but mixed with something else) that looked like Morris from the cat-food commercials….. he was NOT overweight not rotund….. but he weighed damn close to 27 pounds and could easily lay across two couch cushions. He was the most docile, wanting attention cat I have ever experienced.

Early in our marriage, we had an inherited cat that developed diabetes (he WAS rather rotund) and weighed ~ 14 pounds. I gave him to insulin injections every day for close to 10 years before he passed away at the relatively ripe old age of 16.

I couldn't imagine my life with out fur babies.
Coffee is on and stay safe

Our three cats are happy loved and looked after by the family staying in our home in Ukraine. Lucky is here with us in Regina and had his first taste of real winters today at -25C. He is still stressed from his trip but we give him all the love we can.

Hello everyone my name Ximena Jimena from Cuba i want to use this medium to inform the world on how i got cured from Herpes at first when i had symptoms back in 2014 i went for test and it came out positive i lost hope of getting a better relationship or marriage, everything changed when i met Dr Itua i contacted explained everything to him and he said he has the cure so i decided to order it from him, so i actually did after 2 weeks i went for test and i was negative i'm forever grateful to him.he can also cure
hpv
Hiv/Aids
epilepsy
sickle cell anaemia
diabetes
copd
barrenness
cancer
wart
psoriasis
pityriasis rosea etc.
email: drituaherbalcenter@gmail.com www.drituaherbalcenter.com

Xlmena… I would be more interested in finding out how to acquire a box of good Cuban cigars.

There is a reason female cats are called queens.

I keep thinking I'll get a cat but when it comes down to it? I can't..Dexter is a hard act to follow..I know I'll forever be comparing the new to Dexter and will fall short..I'm sure it will happen..but right now? nah...

\\Blogger PipeTobacco said...
Xlmena… I would be more interested in finding out how to acquire a box of good Cuban cigars.

It is pointless to anser to such obvious spambots. :-)
Because it just a program that spread whatever content it was feeded with.
Nothing personal, just business.


Well... I live in a place, where value of cat measured by its abiluty to catch mice. :-)