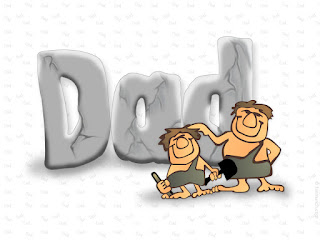 It appears what I thought I knew about Father's Day was well, absolutely nothing.  Yes, it is sad but true that I haven't a clue why, where, or when Dad's Day came into existence.  Being that I wanted to refrain from political commentary, yet still keep up with a daily post of some kind, I was going to have to find something else to satisfy my most recent writing jones.

After at least thirty seconds of intense consideration, I zeroed in on Father's Day.  I dutifully followed up this serious inquiry with 5 tortuous minutes rifling through Google choices before settling on a website devoted to Father's Day.  If anyone would have the skinny about why Dad has his own day, I was sure it would be them.  After all the site is called "Father's Day.com".

What I found out was eye opening.  It appears Father's Day is much older than anyone thought.  Experts have found in the ruins of a Babylon town, a clay tablet upon which one young man named Elmesu, carved out loving sentiments to his father, owner of a nearby sheep operation.

Sadly though, Elmesu's fondness faded when he found out Dad was going to give the sheep farm to Alrus, second son in the line.  Elmesu was beside himself because of his father's betrayal.  So he took the clay Father's Day tablet he had labored over for three days and three nights, and he bludgeoned his father to death with it in front of the cook fire in the kitchen.

Life was tough back in the day.  Ascension within many family lines depended on bloody takeovers carried out by one generation over the next.  Transition was not always pretty.

Post Script and BTW - Now that it is currently acceptable to use lies instead of facts to support one's take, I have some questions about lines and when they are crossed.  If using Fake News as support, does the Fake News have to be completely fake?  Or is it still Fake News if only part of it is?   I mean, is a half truth, or say a quarter truth any better than a flat out lie?  If so, where is the line?  I am only asking this because it may have some relevance to the above post.

Image from this site

I think mothers felt bad having a day so they invented fathers day. It probably had nothing to do with the relationship between fathers and sons.
the Ol'Buzzard

Hah! That read almost as if Mark Twain had written it as one of his humor pieces!!! Nice job!

Ol'Buzzard - Apparently the American version was created first in 1910 out in Washington State by a woman who was raised by her father.

Pipe Tobacco - Thanks, but I believe you have over stepped in your praise.

peppylady (Dora) - Thank you and thanks for swinging by.