No Lester, It is not Complicated 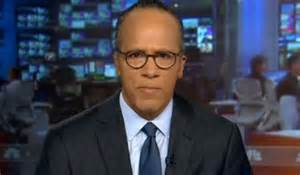 Lester Holt of NBC News tonight was summing up happenings surrounding the Trump Regime's recent Muslim Ban order.  He tried to appear neutral in his summation by finishing with and I paraphrase,  "Many in America are upset of this perceived violation of basic human rights, while others are understandably concerned over the threat of terrorism in this country.  It's complicated ....."

No Lester, it is not fucking complicated.  Rather than calling out Trump's obvious manipulation of people's unfounded fears, instead, you feed the flames by intimating the fear has some validity.  You sir are as bad as Fox.  Asshole.

Unfounded fear is unfounded fear and should never be given any consideration other than it is unfounded fear.  Instead of just giving us the news, you are helping to create it and keep the fear at a fever pitch.  You did your viewers a true dis-service tonight and also lost my respect.

'Fair and Balanced Reporting' resulted in Trump being elected. News outlets did not call out the outrageous claims and actions of Trum,p as outrageous. They were afraid to piss off the Republican Party by calling out their nominee for what he obviously is: a liar, a con man and a dangerous narcissist, unqualified to hold public office.
the Ol'Buzzard

If some radical killed fifty people in a nightclub in Maine, would the fears still be unfounded? If a homemade bomb was set off and killed and maimed a few people at an event in Maine like it was in Boston would the fears still be unfounded? I acknowledge that President Trump is pushing the limits of his executive authority and should exercise restraint but, I cant help but feel his motivation is to protect the American people. Would it be better to error on the side of caution or have another tragedy where large numbers of American lives are lost? Not trying to be argumentative, just an honest question.

Haven't you got rid of Mohave Rat yet? He has certainly drunk the Kool-Aid of anti-Muslim fear and hatred, along with all the rest of the Trumpanzees. I have no fear of Muslims but I fear responsible white men with guns. They have killed more people in America than any refugee or even than any immigrant. And it is spilling over the border into Canada. I think Canada should ban TRump supporters until "we figure out what the hell is going on".

Dear Blog Fodder, does everyone who comments have to agree? The massacre in Orlando and the bombing at the Boston marathon were real events. Real people died and not at the hands of white men with guns. They were killed by radical muslims. That is a fact not kool aid. I am curious why someone who lives in the Ukraine and claims to be Canadian has such a fervent interest in the United States. I am a disabled veteran and I am entitled to my opinion. I respect MC for allowing me to post my views even when they disagree with his. It shows an open mind!