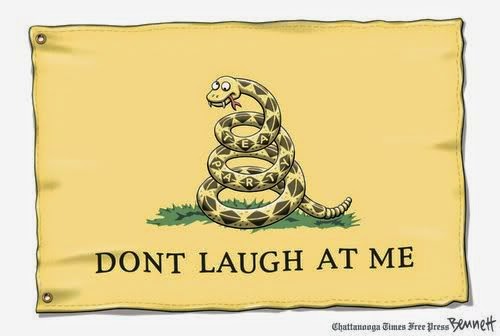 It seems the noise from the Right is no longer focusing on specific issues they feel Obama has blown, screwed up, mismanaged, or just exhibited treasonous behavior sacrificing all that is near and dear to our collective hearts.  Apparently the rally, get em fired up dribble from the leadership of the Right, and not so bright boot-lickers of the GOP and their new masters, the Teabagging wackoes who work for the Koch Machine is now aimed at Impeachment.  They figure no matter what he has done or not done, whatever it is, it is probably an impeachable offense. That traitor has been illegally residing in our nations most sacred house these past seven years or so and playing us for fools and pissing all over our sacred Constitution.  The man is the most useless and evil President we have ever had.

Hmmm.............. I am not sure I have it right, but that is the scenario as I see it sitting Left of Center up here in the nose bleed seats in the great State of Maine.  The Wingers have become so frustrated after seven years of unsuccessfully building mole hills into mountains, many are now desperate and in full tantrum mode.  Their window of opportunity to bring Obama-man down is shrinking.

One of my older brothers had been forwarding me Winger Op-ed emails with his comments afterword.  This is the brother who I had always felt was the most grounded politically.  My other brother was the droolin Winger and I was the pinko Commie.    D always seemed to offer sense when that was what was needed to haul me and the Winger back from our respective edges.

I had been politely ignoring his efforts to engage me in any political conversations.  I have been doing my best to ignore the idiocy that is now our political system and just put one foot in front of the other one to make it safely and confrontation free through my days.  Then he sent some op-ed piece about the resent IRS madness, and his comments regarding how Obama was handling it.  He was "infuriated", followed by something to the effect of how nothing so awful had happened since before his hero Reagan was in office.  He was astounded at Obama's "arrogant dismissals of our laws".   Oh, and of course he had to mention "Impeachment" as his parting shot.

This was my Grounded brother.  I cannot imagine what my foamin at the mouth Winger other brother might think.  He just might be hunkered down in his basement eating Slim Jims, sucking down powder mixed Gatorade and watching "Doomsday Prepper" reruns with an A-K in easy reach in case his perimeter is breached.


Infuriated?  Hmm.  Seems that has been the current mindset of the Right since Bush the Lesser left office.  But what is the leadership of the Right really pissed about?   Is it because the leaders of the Right are concerned about the people of this country?  Given their "just say no" policy when asked to even debate and discuss bills that directly affect most Americans, I would say no, they have no real concern for this country.  They are infuriated because they are not in charge.  Because they are not in charge, they would rather build molehills into mountains than do what we voted them in to do.  A direct result of their bad acting since Obama was elected is that the Left has followed suit.  Bottom line for me is neither party's first concern is the country, it is their party's agenda and either holding onto power or re-taking it.  We Americans suck hind tit to their selfish partisan goals.  And yet we sit in the peanut gallery and swallow every lie and half truth "our side" comes up with.

Bergdahl, the IRS stupidity, Benghazi, blah, blah blah are incidents that deserve our attention and investigation.  None of them deserve the kind of bullshit being spewed forth from the Right.  In the meantime, while these losers stomp their feet, throw tantrums, our economy suffers, our infrastructure continues to crumble, and we sneak ever closer to the 3rd world status I am beginning to believe the leadership of this country wants.

Really?  Arrogant dismissals of our laws?  Seems I remember an incident from the 1980s when Reagan and his traitorous handlers ignored more than a few laws and ended up providing aid, weapons and I am sure some satisfaction to one of our most hated enemies.  Iran Contra was a much more serious breach of our laws and our trust than anything Obama has pulled.  And you have the balls to mention "impeachment".  Did you mention it in the 1980s?

Regardless of the stupidity either side foists on the American people, this country will push on.   So take a breath ferchrisakes.

Still Pink and lovin it,

I, like most of the country under the age of 65, really don't listen to the Conservatives any more.

I have changed blog addresses though and just added you back to my favorites list.

You can't impeach a Congress person, but if you could John Boehner could go down for malfeasance.
the Ol'Buzzard

If you think Obama is bad you are going to hate the next preznut.