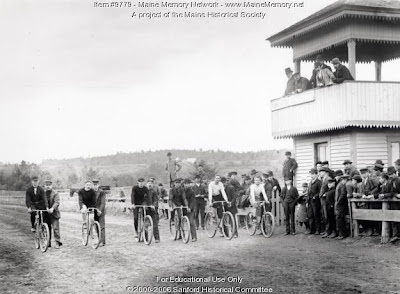 Entered my first race in 1987. "Jack Rabbit Run" in Connecticut. I was sure I was going to leave all 300 other losers in my dust. Got the hole shot. Big mistake. All 300 immediately proceeded to ride right over me. Face down in the mud, I realized I had over estimated my gnarly-dudeness or under-estimated theirs.

I raced Mountain and Road for the next 5 years or so, finally grabbing some top five finishes in Sport and Cat 4. But I was never much more than pack fodder. I raced to have fun. Nothing like hitting a corner with 100 rear derailleurs whirring inches apart and everyone comes out clean. Quite the rush. Having a no dab day in a mountain bike race. A ride where I descend like Tomac and climb like Overend. Grin factor multiplied.
Lately I have trimmed down my racing to an odd mountain bike race and my yearly punishment at the 24 hours of Great Glen. I wish I had the time to go to more 24 hour races. I would like to try one solo sometime. Dark-thirty in the woods can create some interesting times and test my mettle. Exhaustion and the shadows from the bike lights almost create serious flashbacks to my undistinquished and over indulgent past.

The photo at the top is a shot of a bike race here in Springvale at the turn of the century. No, not 2000. The previous century you nimrod. Smartass.
Posted by MRMacrum at 10:28 AM

Email ThisBlogThis!Share to TwitterShare to FacebookShare to Pinterest
Labels: Cycling

I'm not very competitive, for the most part. I raced on a velodrome a bit as a kid, and really enjoyed it, but I haven't raced since. I really have no intention of racing. The only thing I care to be the best at is having fun on the bike, and I think I do pretty damn well at that.

On the other hand, maybe I'm more competitive than I think, but by not attempting to race, I don't have to worry about getting dropped by 300 other riders.

Thanks for the link, MrMac. I shall reciprocate shortly.