A Gun in His Ear 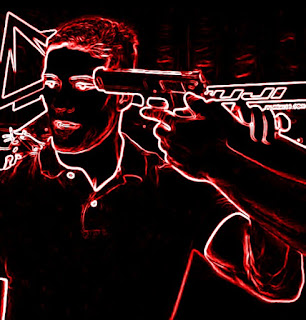 Final Exams were over. The boys were celebrating. Mike had just sparked a third joint when the three of them heard Bill up on the third floor. If they could hear Bill on the third floor, it meant Bill was probably having self-control issues again.Bob looked at Mike, shrugged and motioned him to pass that joint. Tom sat between them on the couch and snickered. He was always useless when he mixed pot and beer.

The boys were not unsympathetic to Bill and his struggles. The guy had just come back from Nam ferchrisakes. They knew he had seen some shit, done some shit and he had night terrors regularly. But tonight was a celebration two extra semesters coming. Two of them finally snagged enough credits to graduate and they wanted to party. Damn Bill and his personal demons. They turned up the stereo.

Sometime later, loud banging on their door broke through their drunken fog. Mike was the first to crack an eye. He wiped the spittle off his chin and rubbed his eyes. He stood and found his footing. Barely awake, he staggered to the door and opened it. It was Bill’s girlfriend wide eyed frantic and incoherent.

“Bill’s threatening to shoot himself.”

Mike leaned into the edge of the door. “What? Bill has a gun? When did he get a gun?” Mike’s return to Reality picked up its pace. He turned and yelled, “Hey assholes, Bill has a gun.”

Mike, with girlfriend in tow, began the trek up to Bill’s apartment.

“I have never seen him this bad. I only wanted to use your phone …… Please, don’t go.” She continued her warnings right up to the moment Mike pounded on Bill’s door.

“What are you doing Bill?”

Really pissed now, Mike grabbed the gun and pushed it down.

“Meet me in the alley asshole. And leave the gun.”

Mike turned around. With Bill on his heels, they tromped back down the stairs. Bill’s girlfriend followed, her weeping eyes bulging and wondering which one was the craziest.

The drunken warriors passed Mike’s open door. He shouts, “No one sticks a gun in my ear.”

In the alley Mike and Bill faced off. Before Bill could focus, Mike knocked him down, rendered him helpless and pushed his face into the gravel. “Never, ever stick a gun in my face again. Got it asshole?”

Bill mumbled. Mark lifted Bill’s head and said, “What was that? You give up?”

Just like that the fight was over. The two of them staggered back to their respective apartments and life returned to normal. The next morning Mike’s roommates asked how it was possible he was able to best Bill. The man was a scary monster ferchriskes. Mike took a moment to answer.

I love this story...which reminds me of my story. Jack(we all remember my dearly departed last husband)..was notorious for pulling his gun on people while dunk or stoned or both. Jack liked to mix black beauties and tuninal's and everclear. So I'm 8 months pg with Maryjo and I get the phone call from the bartender from the paradox bar telling me jack was holding his gun on some guy.. come do something because they were afraid to call the cops. So I go waddling in following my huge belly, check out the scene. There is a tiny shivering pants wetting drunk in a chair and Jack towering over him at 6'2" 250. I walked up to him and said. 'you are such a pussy...the biggest pussy I have ever seen. Are you SO afraid of this little whimp that you have to pull a gun on him? Is he such a badass that you need a gun? judas priest Jack, grow a pair. If you can't give me that gun, take that little piece of shit out in the parking lot and kick his ass then let me..Jack said 'fuck, you always ruin my fun.'...handed me the gun and took the guy out in parking lot and kicked his ass.. which I'm sure he preferred to being shot. The bartender asked me later if I wasn't afraid...I said he wouldn't shoot me cause I was pregnant. 20 months later he tried...didn't work out for him then either..

JACKIESUE - Jeezum girl. You been there done that. I learned to hate mean drunks. You were married to one. Damn girl. Great story btw.You know what you should do with it.

I never had any encounters of that sort. But, I was always a quiet drunk when I was drinking in college. Never knew of any folks with guns they would mess around with when at college neither.

Hell, I was a quiet drunk at deer camp too..... plenty of weapons..... but fortunately not a lot of rancor there either.

I doubt I could have done what you managed to do in that situation. Glad you were able to fix it. And, I’m glad I didn’t not have it happen to me. :)

Pipe Tobacco - at that age I had not yet lost the chip I had carefully nourished as a pre-teen. Had I been sober I also think I would have reacted differently. But I was snockered, just not as snockered as he was.Bill didn't go to college. He was a mechanic. When sober he was a great guy to be around. We remained friends until I moved out later that year.

Not sure how much is true. But it could well be and we have issue with mental ill, getting fire arms.
Coffee is on and stay safe

peppylady - I thought about your comment. As it turns out, your belief or disbelief means little to me. I am just happy you stopped by. Thank you for that.