Man in the Tree - Too 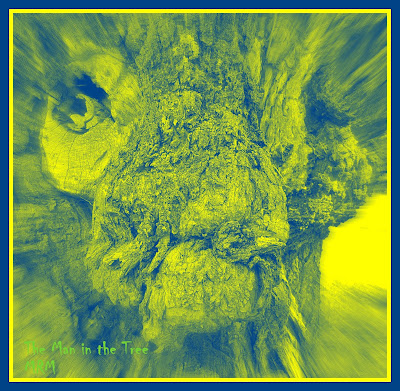 One of the positive takeaways from my Acid Days was learning to look past the first impression of an image and find those smaller images that lurk just beyond the outer surface.

It was mine and two others first trip in 1967.  We swallowed some microdot Strawberry Fields.  I sat and watched an ant hill for maybe a couple of hours.  Maybe more, Time takes a back seat when under the influence of LSD. I was so focused with my eyes but a couple of inches from the ground, the ants loomed large as they went about their scavenging.

In retrospective, that might give appearance I was just another drug befuddled and bewildered teenager with nary a whisper of a clue whatsoever.  I mean, who in their right mind would think watching an ant hill for a couple of hours was a normal activity.

Well Duh People, ...... I wasn't in my right mind.  I was tripping fer chrisakes.  My experiences on LSD became much wackier over time. LSD definitely twisted my normal take on the existence around me. 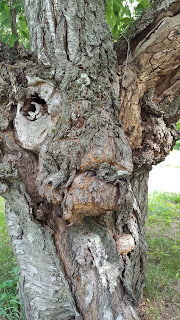 So anyway ......... those years tripping the light fantastic were not a complete waste.  I learned some patience and better appreciation of the beauty around me.  LSD always intensified every situation I was in, whether it be dancing in the pucker or cooling my heels in a local lock up.  Not always pleasant, but always interesting in retrospect. Each were experienced outside what would be considered my normal sanity center point.  Since I was convinced perception is the key ingredient needed for Reality to exist, then it was not me who was trippin, it was the World beyond my eyelashes that was.  ............... LSD only helped me see the world for what it really was ...............  Nothing but a Fig Newton of my imagination.

I derived the above image out of this rather pedestrian Kodak moment in my dooryard.  I snapped a picture of the weeping cherry that has graced the front of my house for the last 50 years.  It has been on Death's Door for at least the last 20 years.  Yet each year, it tosses out new growth.  I think it comes back every year because there is a creature living inside it just below its outer surface.

He has yet to introduce himself.

Email ThisBlogThis!Share to TwitterShare to FacebookShare to Pinterest
Labels: Answers to burning questions, Dredged from the Past, Inspiration, Personal

Not sure about that cherry creature. From the looks of it, maybe better if that spirit is left in the tree.