Becoming a Dirty Ole Man in a Good Mood 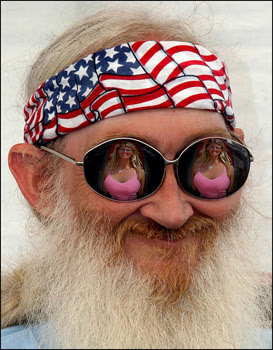 So I have decided to take a new track.  Stop being so pissy.  Retire from the angry ole white guy club.  Easy to think about, fantasize about and dwell on the possibility.  Yeah, the dream comes easy, the Reality does not.  Execution is always the rub.  How do I go from months of peaking anger over the absolutely insane political and social stupidity brewing just outside my corner of Maine to the moment when I become one with my universe..........  to that point where nothing matters?

Maybe it is my inability to think outside the box created for me at birth.  Possibly it is a genetic or gender thing.  But try as I might, I find it difficult to come up a similar number of options I had in front of me oh say 40 years ago when I was younger and number. Back when I was clueless and feeling overwhelmed I ended up picking the path of least resistance, which entailed picking a direction, any direction and putting one foot in front of the other.  Worked for me back then.  Got me to where I am today.

The road ahead has fewer forks.  Less variation in the curve.  And yet I find the difficulty in choosing a fork as tough now as it seemed back then and back when.  I have tasted one way to go.  There was some satisfaction I will admit being cantankerous and generally grumpy.  But the mood did not last.  I flat out just don't like being an angry old white guy.

So which fork is the one?  Which path is left that might give me some peace and maybe a smidgen of grace?

I guess the only alternative to being an angry ole white guy is to work hard at being a dirty ole man in a good mood.  After all, enjoying the sights beats the Hell out of bitchin about there being no lights.  Watch out Ladies.

Actually, most folks around here think I'm pretty funny, but my blog is for another side of me.

Are you saying that you weren't a dirty old man before?

Becoming a dirty old man is about the only goal in life that I've accomplished. It was easy, all I had to do was live long enough!!

BBC - It's odd how our out in public selves are so much different than our inside selves. I think my blog actually gives folks a combination of what I might be like publicly and a small look into what makes me tick and what goes through the Sahara Desert charitably otherwise known as my mind.

Kulkiri - The ladies never get boring do they. Love the ladies even the old ones.

Mr. Charleston - Well I guess it is better to have a goal I will fail to live up to than to have none at all.

I'm going to drink beer with a neat Canadian chick I'm really interested in today, I hope that goes well, it's hard to find a woman that seems right for me.

The term Dirty Old Man is a female idiom.

The way women see it:
When you are a young man looking to get laid you are interesting...when you grow old you are a dirty old man.

We don't change, we just age.

So, punch out the windows
and kick down the doors,
Drive out the prudes
and bring in the whores.
Let's have a party.
Wooopeee!
the Ol'Buzzard

BBC - LOL! Yeah I could see you having a problem finding a woman you could get along with.

Ol'Buzzard - Think I'm gonna wait til at least Mud Season before I punch out the windows.

I am too tired to leer. I just admire.