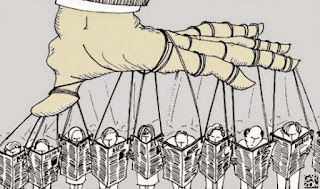 When flinging derogatory comments at the  Right Winging side of the political aisle, a favorite go to slogan was, "You can't fix Stupid".  It offered some small satisfaction and closure when dealing with the idiots of the opposition.  Logic certainly was useless as the Right existed and still does in a selfish intractable world devoid of logic and common sense.

I have moved on from the quaint notion, “You can't fix Stupid".  More than 30 years of bruises and blackened eyes trying to bring the Stupid back to the world of objectivity and facts has convinced me that the Stupid of the Right will always be stupid and there is nothing I can do about it.

It is obvious to me that the puppet masters pulling the Right Winging strings of their slack jawed minions know what they are doing.  They know that what they are doing is evil when looked at using universally accepted rules of ethics and moral behavior.  They just do not care as long as they can continue to manipulate the population in the direction that benefits them and those like them.  Using lies to build fear and divisiveness, they have been able to move the USA in any direction they want.

To be fair, there are those on the Left who also try to emulate the Right's evil ways.  Their efforts are Bush League when compared to the Right’s masterful ability to disseminate fantastical lies as facts

I realize I can't fix Stupid. More importantly, It is Evil I cannot fix. I can only oppose it and try to minimize its impact.

Hell of a world we live in, isn't it? Read somewhere that under apartheid in South Africa 15% of the population (which was white) controlled the country democratically and constitutionally because they controlled the legal system, and the military. The notion that the Right will have any respect for the law and the constitution if it gets in the way of maintaining white supremacy is dreaming in technicolour.

I do not really know... perhaps it was youthful naive presumptions.... but while there has always been corruption in politics..... it seems like there was less of it in the 60s and if you ignore Nixon... also in the 70s. The 80s seemed to ramp up nastiness and now there is another exponential rise in nastiness. Again, though perhaps it is just my awareness improving?

Pipe Tobacco - I was like you. I felt there was less blatant corruption back in the day. I do not think your awareness is improving though. I just think those who are corrupt have been emboldened to parade their corruption in public.